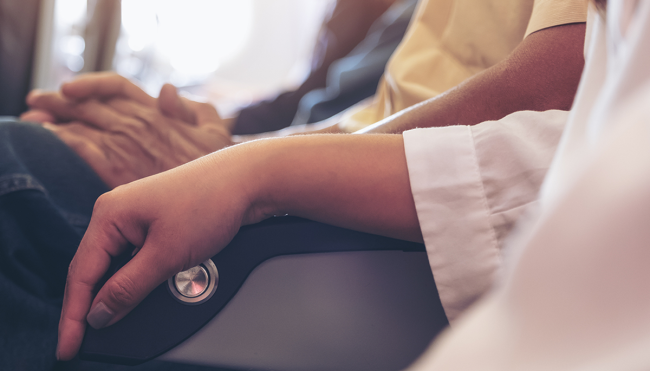 Over the past few months, I’ve come across a number of articles suggesting some people might need to take a crash course in socialization as the pandemic begins to wane—and based on what’s routinely unfolded on commercial flights over that span, there might be something to that argument.

In addition to the many altercations stemming from mask mandates we’ve regularly been treated to, flight attendants have had to deal with people who couldn’t wait to land before ripping a line of cocaine and prevent passengers from storming the cockpit on multiple occasions. As a result, some airlines have suspended alcohol sales and the FAA has instituted some incredibly hefty fines in an attempt to crack down on unruly behavior.

However, that apparently wasn’t enough to deter two people who were kicked off of a United Airlines flight in San Francisco over the weekend after throwing hands over a dispute concerning who had the rights to the armrest they shared just before takeoff.

On my first flight in 15 months, of course we were rerouted back to the gate because two passengers got into a physical altercation over elbow placement upon arm rests. pic.twitter.com/YBAV1iG2Fk

Now, I was under the impression the rules of airplane armrest etiquette are fairly well-defined, but this incident and similar ones that have unfolded over the years would suggest that’s not the case. As a result, I don’t think it would be too much to ask the FAA to do what it should’ve done decades ago and formally codify these rules—and I’m more than happy to do the bulk of the work for them.

Earlier this year, I took a closer look at the legal argument concerning whether or not you have the right to recline your seat on a plane and discovered it’s a wildly more complex issue than I ever would’ve imagined. Airlines are arguably complicit in these disputes over personal space thanks to their historically laissez-faire approach to a topic that wouldn’t be as divisive as it is if people didn’t struggle to grasp the concepts of common courtesy and common sense.

A couple of years ago, Rich Eisen threw up a surprisingly divisive poll on Twitter that revealed the general population is largely split over whether or not the person in the middle seat is entitled to both armrests.

does the person sitting in the middle seat on airplane get both armrests?

I could probably write a thousand words about how those results are the encapsulation of the political divide in a capitalistic society that places an irrational emphasis on personal liberty. However, I’ll spare you that thinkpiece and simply state that anyone who said “no way” is 100% wrong.

The airplane armrest debate is essentially the 21st century equivalent of the Judgement of Solomon, a Bible parable concerning two women who each claimed to be the mother of a baby. As was the case in that tale, there’s no real way to fairly share an armrest, and in order to resolve this modern dispute, empathy also needs to ultimately prevail.

The reasoning here is pretty simple: sitting in the middle seat is a fate most people wouldn’t wish on their worst enemy, so anyone forced to suffer it should be entitled to the only real luxury they can take advantage of. Unlike the passengers that flank them, middle seaters can’t lean their head on the window or stretch their legs in the aisle whenever they feel like it, and if you’re able to do either of those things, insisting you also get multiple armrests is the textbook definition of a “dick move.”

Unfortunately, appeals to emotion like this normally don’t stand a chance against the selfishness of human nature, which means we’re not going to see any progress until the people in charge grow a pair and institute actual policies they probably never will.