Apocalyptic Asteroid Will Hit In The Next Decade And Space Agencies Are Covering It Up, Says Biblical Scholar 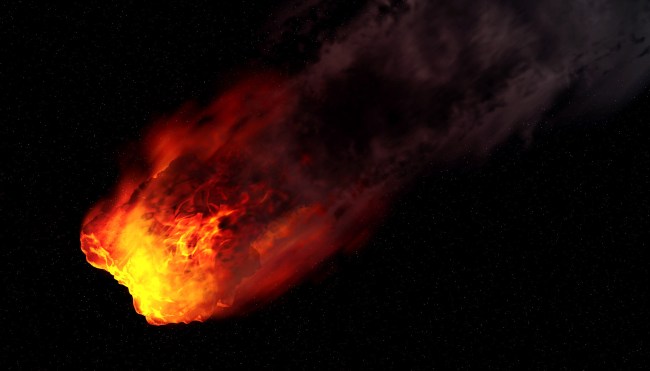 Back in 2005, NASA published an article about how the massive 99942 Apophis asteroid nicknamed “The Colossal God of Chaos” for it’s destructive potential, was predicted to buzz Earth on Friday, April 13, 2029.

At that time, the gigantic Apophis space rock, previously known as asteroid 2004 MN4, had up to a 2.7% probability that it would strike our planet on that date by America’s space agency.

Jon Giorgini of the NASA Jet Propulsion Laboratory (JPL) said at the time that when Apophis passes by Earth, “at closest approach, the asteroid will shine like a 3rd magnitude star, visible to the unaided eye from Africa, Europe and Asia — even through city lights. Close approaches by objects as large as 2004 MN4 are currently thought to occur at 1000-year intervals, on average.”

Meaning no one alive now, nor anyone in numerous previous generations, has ever seen anything like it.

After further study and observation, that date was pushed back to April 13, 2036, before being pushed back even further to April 12, 2068 – the third date on a list of 10 recently released by NASA where there will be a calculable risk for deadly impact by the Apophis asteroid.

Today, however, biblical scholar Tom Horn says Apophis could strike Earth much sooner, at some point within the next 10 years, based on a prophecy from the Bible.

Speaking to the Daily Express, Horn said, “The asteroid Apophis has a far greater chance of impacting Earth in 2029 than they are letting on.”

Horn claims he will prove his doomsday theory in an upcoming documentary titled The Wormwood Prophecy.

“I intend to disclose facts that are stranger, and scarier, than most people can comprehend and it is going to shake the public to the bone,” said Horn. “This involves a cover-up of highest order by national space agencies, including NASA. Chief technology experts and working scientists agree with me. But, what is more concerning is this was prophesied in the Bible for the end times.”

Then Horn prattled on about the Book of Revelations and the TL;DR version of the prophecy is a great star named Wormwood, which Horn believes could be Apophis, “blazing like a torch, fell from the sky” and wiped everything out.

Sounds like NASA, ESA and other space agencies need to get on the stick and find out if intentionally crashing a spacecraft into an asteroid at over 14,000 mph is going to be our best defense or not.

Related…
• NASA Reveals 10 Dates When Apophis, The ‘Colossal God Of Chaos’ Asteroid, Could Smash Into Earth
• NASA Says City-Killer Asteroid The Size Of The Great Pyramid Of Giza Will Have A Chance Of Smashing Into Earth In 2022
• A ‘Potentially Hazardous’ 3,000-Foot Long Asteroid Is Flying By Earth: Here’s How To Watch It
• NASA Has Spotted A Giant Apollo Asteroid, The Most Dangerous Class Of Space Rock, On A Concerning Earth-Orbit
• New Asteroid Detected, Named The Fourth Most Dangerous To Hitting Earth According To The European Space Agency
• Space Agencies Are Going To Crash A Spacecraft Into An Asteroid At Over 14,000 MPH To See What Happens
• Experts Warn ‘100 Percent’ Chance Of Asteroid Colliding With Earth And Action Needed To Prevent Mass Extinction