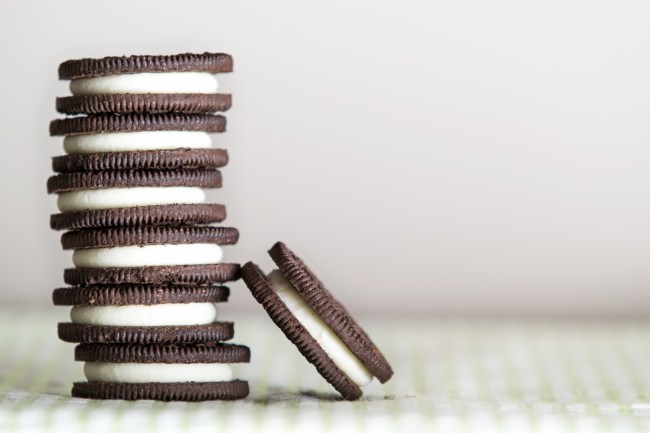 The company that brought us Oreos and Chips Ahoy are now hoping to cash in on the marijuana legalization movement.

It is in the process of developing a line of CBD-infused snacks, presumably for those customers more focused on wellness and living a healthier lifestyle.

And why not? After all, the cookie maker has been out there for decades selling the stoner community Nilla Wafers and Nutter Butters, so what better way to ensure world domination than seducing its existing red-eyed clientele while also moving in on those of their sober counterparts Jazzercizing their way into old age.

It’s a plan of evil genius if you ask us.

“Yes, we’re getting ready, but we obviously want to stay within what is legal and play it the right way,” Mondelez CEO Dirk Van de Put said earlier this week on CNBC’s “Squawk on the Street. ”

There was once a time when marijuana edibles were manufactured almost exclusively in the kitchens of trailer courts across middle America by hippies and strippers as a unique alternative to smoking weed all of the time.

These THC-infused treats, which were mostly made in the form of brownies, were a hot commodity, and they were also well known for their ability to knock one’s dick in the dirt.

Considering their popularity back then, it’s really no surprise that as marijuana becomes increasingly more legal in the United States – over 90 percent of the country has some type of pot law on the books — cannabis edibles are one of the largest growing market sectors of the pot slinging trade.

This is especially true concerning products made with the non-intoxicating part of the plant known as Cannabidiol or CBD.

Not only does this pot component have a variety of purported therapeutic properties, but some select forms of it are also considered mostly legal at the national level. It’s no wonder why so many mainstream companies, like Mondelez, are now swarming like hungry wolves.

Some market analysts predict the market could be worth $22 billion in the next few years.

But don’t expect to see CBD-infused Oreos or anything like that at the grocery store. Mondelez says that associating the substance with their popular brands is not conducive to maintaining relationships with their current customer base.

The most likely scenario, company officials say, is the creation of new products.

“Our current range of brands are family oriented, and we don’t currently intend to bring any cannabis or CBD products under these brands,” a company spokesperson said in a statement. “CBD-infused products are a rapidly evolving consumer space, and we are studying this space and watching the regulatory environment.”

Yeah, although Congress passed a bill last year that legalized industrial hemp production for the first time since 1937, the U.S Food and Drug Administration is causing some trouble for companies wanting to include CBD in food and beverages. As long as it is derived from hemp, CBD is legal.

But it hasn’t yet gone through the FDA’s rigorous approval process, so it’s technically not permissible as a food additive. That situation is supposed to be hashed out starting this month.

Still, former FDA commissioner Scott Gottlieb said weeks before packing his shit and moving back to Connecticut, that it could take years before the agency understands how to regulate CBD.

What this means is while companies like Mondelez are preparing to get involved in the CBD-infused edibles market, it’s not something you can expect to see anytime soon.

Although smaller companies are more apt to test the FDA on this matter – you might see CBD-infused dinners and other food events popping up here and there from time to time – none of the major corporations are going to risk legal woes just to make a few bucks.

They are not going to leap until the FDA makes it perfectly clear that the matter of CBD as a food additive is ultimately settled.

“The space is not clear,” Van de Put said. “It’s a bit clearer in non-food products. In food products, I’m hoping that the FDA will bring some clarity in the coming months.”

While we’ve mauled down on shit tons of Oreos and Chips Ahoy cookies over the years to tame that dreadful beast known as the munchies, that shit is starting to get the best of us.

We’re getting older, which means it is harder for us to keep eating like assholes and still maintain our girlish figures. However, some of us here at BroBible don’t give a flying fuck. It’s fun to get high and eat crap cuisine.

For us, the real diehards, CBD stands for only three things: Cornhole, Beer, and Doobies. But others around the office – and we’re not mentioning any names – are drinking less, hitting the gym after work instead of the tavern and eating tons of CBD oil and gummies as part of their daily health regimens.

These are the ones frothing at the mouth at the moment over the news of a CBD-infused biscuit or some shit set to be sold by the same junk food legends that made them fat bastards in the first place.

We don’t know whether to laugh or cry.