Coors Light Is Giving Away 500,000 Beers To Provide The People Of America With The Free Drink We Could All Use Right Now 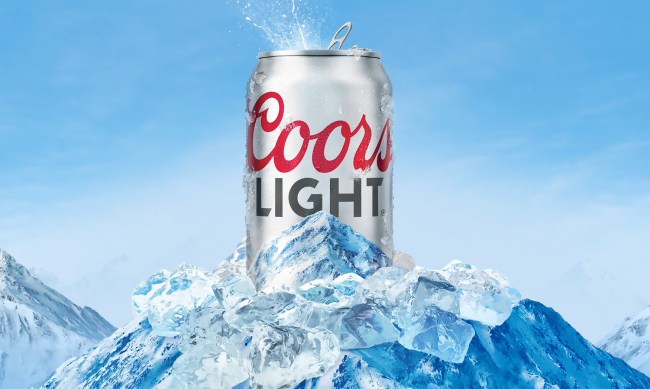 I’ve had more than a few laughs over the years at the expense of the doomsday preppers who are consumed by the need to hoard imperishable items and ammunition in underground bunkers in anticipation of an apocalypse and the guys in Silicon Valley who’ve used some of their ungodly sums of money to equip their homes with various features that you’d really only have to utilize if The Purge becomes a reality.

However, the tables suddenly turned a few months ago when those people scored a somewhat bittersweet victory as the planet was plunged into a crisis that saw their paranoia become fairly justified. I soon found myself wishing I’d done some stockpiling of my own when I walked into the grocery store only to emerge empty-handed because I’d rather starve than eat a whole chicken that’s been stuffed into an aluminum cylinder, which was really the only option in an otherwise barren canned goods section.

Those shelves may have been virtually empty but I thankfully didn’t run into the same issue when I started to amass a stash of what is perhaps the most essential thing to have on hand when wandering into the outside world is deemed a “no-no”: booze.

The World Health Organization has warned about the potential risk of drinking to cope with our current times but I’m still waiting for them to suggest a suitable alternative, and based on some of the evidence, I’m not the only person declining to take their advice into consideration (although I haven’t joined the ranks of the sizeable chunk of Americans who’ve used working from home as an excuse to drink on the job).

I’d argue anyone who’s managed to reach the age of 93 has earned the right to drink as much as they damn well please, which is exactly what Olive Veronesi got the chance to do after a picture of her holding a sign asking for someone to bring her beer while she was isolated inside her Pennsylvania home came to the attention of Coors Light, which dropped off 150 cans to make her wish come true.

JUST IN: 93-year-old Olive Veronesi of Seminole, PA, who held up a sign at her window asking for more beer, has received a delivery from @CoorsLight. The brand tells me 150 cans arrived at her house today. pic.twitter.com/c2lfGFBBTS

It appears the brand is still in the giving spirit, as it’s decided to come to the rescue of anyone who could use a drink right now by announcing it’s set aside 500,000 beers that will be distributed for free to the people of America.

All you have to do to get in on the action is nominate someone (Coors Light suggests picking a person you know but is there really anyone you know better than yourself?) in a tweet that includes #CouldUseABeer and you’ll find yourself in the running to receive a code that can be redeemed for a six-pack.

Let’s face it – right now, America #CouldUseABeer. Tell us who could use a 6 pack and why. We’re buying.

Sure, free beer probably won’t solve all of your problems if you’re currently feeling as blue as the mountains on an ice-cold can of Coors Light, but hey, it’s probably not going to make things worse.