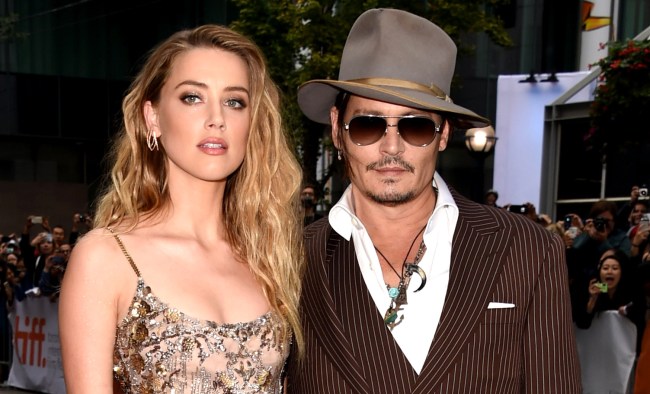 To hear Johnny Depp tell it, during the 475 days between when he got married to Amber Heard and the day she filed for divorce, she was sleeping around with a whole slew of celebrities.

On Monday, during testimony, it was revealed that Depp also accused Heard of sleeping around on him with actors Channing Tatum, Leonardo DiCaprio, Eddie Redmayne, Jim Sturgess, Kevin Costner, Liam Hemsworth, and actress Kelli Garner.

475 days… and she was accused of sleeping with a total of 12 different celebrities, including Depp, during this time period. That, is one very busy schedule to maintain.

“He would taunt me about it — especially when he was drunk or high — and had derogatory nicknames for every one of my male co-stars he considered a sexual threat,” Heard testified in a statement.

Depp apparently loves giving people a nickname with the word “turd” in it. That and threatening to have sex with a person’s corpse.

He also allegedly referred to Elon Musk as “Mollusk,” reports Page Six. Such a creative guy.

“He would try and catch me out by taking my phone or telling me someone had told him I was having an affair and act as if he had information proving it — when I really hadn’t,” she said in the statement.

Depp also “demanded” to know about romantic scenes in films and often made a fuss “about how people can watch me get f–ked on camera,” Heard claimed.

“He would even get himself copies of the scripts I was looking at, without asking me, to review them for himself,” Heard said.

“His rules got tighter every year we were together about what nudity or scenes were acceptable, wanting descriptions of every detail, every aspect of scenes and how they were covered, placing increasing restrictions on what I could and couldn’t do.”

Heard also claimed Depp, reports the Daily Mail, that Depp would not allow her to wear low-cut dresses to movie premieres, saying, “He spoke possessively of me as ‘my woman’ and made comments that he wished he had found me before I had slept with anyone else, joking he would have locked me away at 14. He would obsess about how I dressed. If I wore a low-cut dress, then he would say things like ‘my girl is not gonna dress like a whore.'”

“He demeaned me anytime I tried to wear anything that could be seen as sexy, calling me a ‘whore,’ ‘slut,’ ‘fame-hungry’ and ‘an attention whore,’ but it got worse over time,” Heard stated.

‘He started saying things like ‘well I’m going to have to watch you get raped’ and ‘I hope you get railed by a bunch of f**king fellas.’

‘Sometimes he used racial epithets about the men I would be – or deserved to be – assaulted by, saying things like ‘a slimy Mexican’ or ‘a f**king gang of big black mother f**kers are going to f**k you and get their big c**k in you.”

Heard also claimed Depp told her “death was the only way out of the relationship” before their divorce in 2016.

Depp, who also has another $50 million lawsuit pending against Heard, claims Heard is making all of this up, accusing her of “building a dossier” as an “insurance policy” for her eventual exit from the marriage.

If true, she really needs to go into screenwriting instead of acting because based on her testimony Heard has one of the most vivid imaginations you’ll ever encounter.