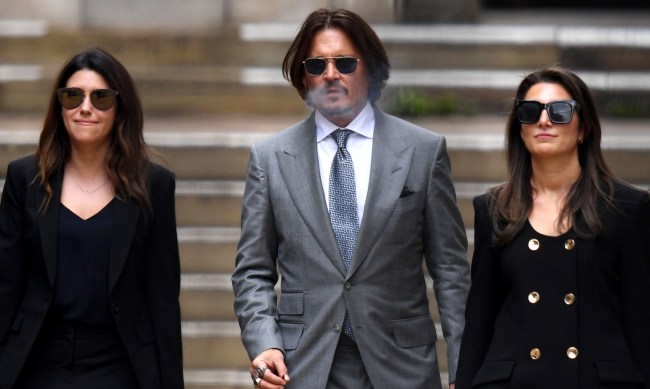 Day 8 of the most wack trial of the century, Johnny Depp vs. The Sun, a libel case in which Depp is suing for $50 million as he believes the newspaper erroneously called him a wife beater, based on stories told by his ex-wife actress Amber Heard.

While both Winona Ryder and Vanessa Paradis, two longtime Johnny Depp girlfriends of the past, were expected to provide testimony defending the Pirates actor during the proceedings on day 8, instead, Depp’s legal team, due to the case running over schedule, decided that their witness statements in which both women stated that Depp had never been violent towards them would be shared with the court, according to Page Six.

“I am aware of the violence allegations that have been made publicly for the last few years by Johnny Depp’s ex-wife Amber Heard,” Ryder, who was once engaged to Depp, said in her statement.

“I knew Johnny very well years ago. We were together as a couple for four years, and I counted him as my best friend, and as close to me as family. I count our relationship as one of the more significant relationships of my life.

“I understand that it is very important that I speak from my own experience, as I obviously was not there during his marriage to Amber, but, from my experience, which was so wildly different, I was absolutely shocked, confused and upset when I heard the accusations against him.

“The idea that he is an incredibly violent person is the farthest thing from the Johnny I knew and loved.

“I truly and honestly only know him as a really good man — an incredibly loving, extremely caring guy who was so very protective of me and the people that he loves, and I felt so very, very safe with him.

“I do not want to call anyone a liar but from my experience of Johnny, it is impossible to believe that such horrific allegations are true. I find it extremely upsetting, knowing him as I do.”

“Through all these years I’ve known Johnny to be a kind, attentive, generous and non-violent person and father.

“On movie sets the actors, directors and entire crews adore him because he is humble and respectful to everyone, as well as being one of the best actors we’ve seen.

“I am aware of the allegations which Amber Heard has publicly accused Johnny of for more than four years now.

“This is nothing like the true Johnny I have known, and from my personal experience of many years, I can say he was never violent or abusive to me.

“I have seen that these outrageous statements have been really distressing, and also caused damage to his career because unfortunately people have gone on believing these false facts.

“This is so upsetting as he has helped so many persons in his personal and professional life, with kindness and generosity.”

A spokesperson for Heard stated that they were “glad they did not have the same experience” as Amber did, but “one woman’s experience does not determine the experience of another woman.”

The Sun claims in its reporting that there were 14 alleged attacks on Heard by Depp, the last coming two days before they Heard filed for divorce and got a restraining order against the actor.

Depp is also seeking another $50 million in a separate lawsuit against Heard for allegedly defaming him with domestic abuse allegations, calling it a “elaborate hoax” and alleging that Heard had an intimate relationship with Elon Musk during the first month of their marriage.