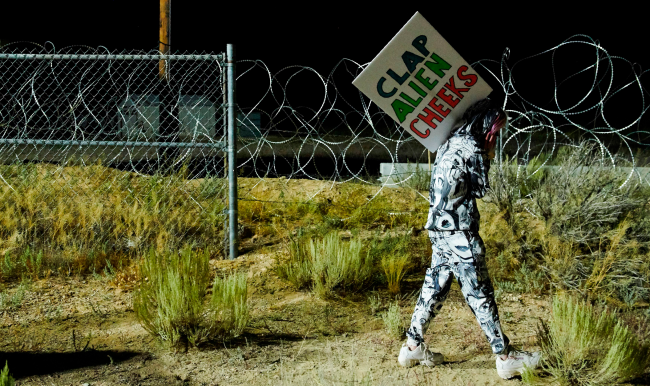 Back in the summer of 2019, more than two million people signed up for a Storm Area 51, They Can’t Stop All of Us Facebook event that started out as a joke and ended up with a hundred people (at most) showing up, camping out, and basically accomplishing nothing.

The United States government, however, didn’t take this event lightly. The creator of the “Storm Area 51” Facebook event had the FBI show up at his front door. The US Air Force issued a stern warning to anyone planning to “Storm Area 51.” And the Defense Visual Information Distribution Service (DVIDS) sent out a tweet threatening to bomb attendees of the event (for which the U.S. Department Of Defense later apologized).

Pretty wild stuff, but it turns out that what we knew then was only the tip of the iceberg.

Government documents obtained by Property of the People, a nonpartisan government transparency group, and shared with Rolling Stone reveal that dozens of law enforcement agencies were involved in preparing for the “Storm Area 51” event.

The documents show law-enforcement agencies feared that domestic or international terrorists might embed within the Storm Area 51 attendees; that a group of YouTubers got caught trying to track the movements of the official Area 51 employee bus; and that law enforcement prepared for possible exposure to nuclear and biological weapons. The documents also hint at the extreme level of security that protects Area 51: One government document describes “automated deadly force countermeasures” in place to deal with intruders.

Related: Why Did The CIA Remove This Rare Area 51 Footage From YouTube?

Also among the information revealed in the 135 page “Storm Area 51 Law Enforcement & Intelligence Documents” is a meeting which took place on July 22, 2019 convened by the Federal Bureau of Investigation (FBI) and included representatives from local law enforcement agencies and the state of Nevada’s Department of Public Safety, as well as officials and analysts from the Bureau of Land Management (BLM), the Department of Defense (DOD), and the Nevada National Security Site, (NNSS), and base security.

“Areas will be checked for CBRNE threats before any personnel begin arriving or as soon as reasonably achievable,” one of the documents reads. “Preferred that those areas then remain secured by on-scene personnel for the duration of the event.”

Annie Jacobsen, the author of Area 51: An Uncensored History of America’s Top Secret Military Base, told Rolling Stone, “That’s not the Keystone cops worrying an invasion of ants.”

While all of this was an understandable reaction by law enforcement and the U.S. government, considering over two million people had claimed on Facebook that they would be attending the event, with another 1.4 million people stating they were interested in attending, the amount of resources, time and money that ended up being spent to protect Area 51 from what ended up being around 75 people, in retrospect, seems more than a little excessive.

So what exactly are they hiding?