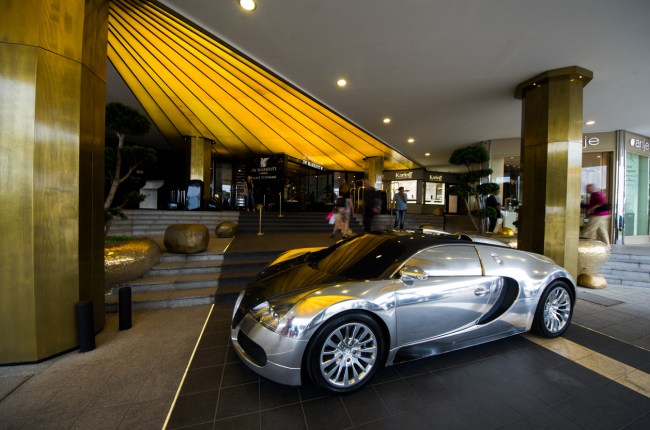 The Bugatti Veyron Super Sport has an 8.0-liter quad-turbocharged W16 engine that pumps out 1,200 horsepower and has a top speed of 267 mph. This modern marvel of automobile engineering is near perfection, but the only problem is that a Bugatti Veyron is up to $3 million. One man created his own Bugatti Veyron out of a 2002 Mercury Cougar.

Florida man usually only gets headlines when they do dumb crap such as stealing $12,000 for a marijuana grow house or causing a Spirit airliner to drop 35,000 after he was vaping in the plane. But today Florida man gets a headline for something positive, building a magnificent Bugatti Veyron replica.

An Orlando man took a 2002 Mercury Cougar and transformed it into a beautiful Bugatti Veyron replica. Even the wing retracts just like the real one. The impressive knockoff was first offered in a Craigslist listing, but has since been transferred to Car Export America, where you can see more photos of this Bugatti dupe.

The Craigslist went viral and since a “lawyer, private investigator and the police department” have been involved. So is this a Cougatti or a Fugatti?

Unfortunately, you won’t get the 1,200 horsepower or top speed of 267 mph. Instead, you get a V6 and a top speed of 140 mph. This is like expecting slow CD’s and Dom P’s but getting eight tracks and six-packs.

You will get back seats with the Bugatti imposter, which is something the real Veyron does not have. The vehicle’s odometer reads 129,239 miles. Maybe this Mercury Cougar identifies as a Bugatti Veyron.

This actually isn’t the first time that some mad mechanic transformed a Mercury Cougar into a Bugatti Veyron, there was another imposter in 2016.

No word on whether or not this fake Bugatti needs a $21,000 oil change.

RELATED: Amazing Life-Size Working Bugatti Chiron Is Made Of 1 Million Legos, But You Could Bicycle Faster Than This Car