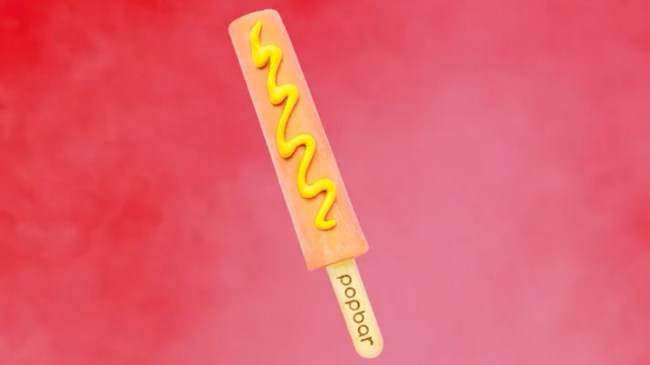 Learning how to control your impulses is a pretty vital aspect of navigating your way through life, and plenty of people out there can probably point to the exact moment where they learned that just because you can do something doesn’t mean you should; the kind of incidents that result in a visit to the emergency room, a trip in the back of a police car, or dinosaurs wreaking havoc on a remote island near Costa Rica after being resurrected from extinction.

However, there are also plenty of people out there who struggle to come to terms with that concept.

That includes the creative minds behind the many twisted culinary creations The Brands have unleashed on an unsuspecting world in recent years, like a chicken sandwich with a bun made of sour Airheads, the ranch dressing-flavored eggnog Hidden Valley used to try to ruin the holidays last year, and the macaroni and cheese ice cream Kraft whipped up.

That last stunt is just the tip of the iceberg when it comes to the various ways desserts have been desecrated. In 2020, French’s announced the release of a mustard ice cream the same week Oscar Mayer saw and raised them with an ice cream sandwich containing a frozen spicy mustard concoction containing chunks of real, actual hot dogs.

Now,  the latter has returned with a vengeance courtesy of the “Cold Dog,” which is a dream come true for anyone who’s spent their life wondering why no one has ever made a popsicle that tastes like a hot dog.

The hot dog-flavored popsicle was engineered in conjunction with Pop Bar, and if a dessert promising the “smokey, umami notes of Oscar Mayer’s iconic wiener topped with a signature swirl of ‘mustard'” sounds intriguing, you can pick one up for $2 at one of the chain’s locations for a limited time.

This development is just the latest piece of evidence that 2022 is the Year of Hot Dogs Being Used For Things Hot Dogs Shouldn’t Be Used For. Earlier this summer, a brewery in Texas dropped a hard seltzer made with hot dog water, and a Yankees fan recently went viral for using a meat tube as a straw for his beer after hollowing out the center.