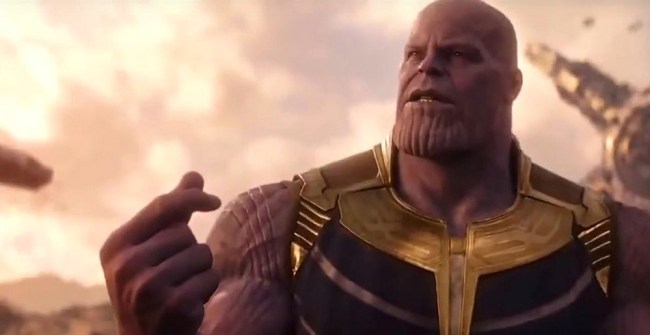 Fan theories are the best. It’s the true sign that a movie or TV show has captured the imaginations of its viewers. From Stranger Things to Game of Thrones to pretty much any Marvel movie, anytime there are questions to be asked, fans will always give it their best shot to answer.

Obviously, Avengers: Infinity War left fans with some gigantic questions with regard to the entire Marvel Cinematic Universe.

Now, we already know, thanks to some Marvel actors spoiling it (*cough* Dave Bautista *cough*), most, if not all, of the Avengers will survive despite being turned to dust thanks to Thanos’ snap.

So that’s not the question. The real question is, how? There has been no shortage of theories on what will happen in Avengers 4, but this theory, posited by Redditor LA-Confidential might just be the best, most thorough concept we’ve seen yet.

We saw in DOCTOR STRANGE that he can cast a spell on the Time Stone to impose an infinite time loop, represented as a green energy ring rotating around his left wrist. No matter what happens, it always resets to the point in time when the spell was cast. The Stone and the spell on it keep working, even after Doctor Strange gets (repeatedly) killed. This point is important, and ties in with Strange’s later reminder to Ebony Maw that spells he casts on the Time Stone will persist even after he dies. When he finally gets Dormammu to relent and releases the spell, the energy ring on his left wrist isn’t seen again.

Basically, Doctor Strange wants to do to Thanos what he did to Dormammu, trap him in a time loop.

So Strange needs a way to bind Thanos himself to the time loop spell without him knowing, even if he zips a million miles away. For that, he needs Thanos to be carrying the Time Stone. Strange keeps it hidden during the fight, knowing Thanos will win (which is why Quill’s freakout didn’t spoil the plan, but was necessary for it). We may even find Strange was manipulating the fight just to prevent Avengers from getting killed, say by using portals to get them away from Thanos the instant they landed a blow. He needed a believable way to surrender the Time Stone to Thanos, without him catching on. His claim that he was trading it for Tony Starks’ life was just an excuse to make it credible – as he said, he wouldn’t hesitate to sacrifice Tony to protect the Stone. It wasn’t because Strange saw Tony ends up being crucial to victory, though he may well be. It was a way to get the Stone past Thanos’ skepticism, which we saw in his “No tricks?” comment.

When Strange hands over the Time Stone, he’s already cast the time loop spell on it. In the whole sequence, we never see Strange’s left wrist – and in fact, we never see it again in the whole movie. We see full shots of every other character, and we see Strange’s face, and torso, and right arm… but not his left hand. Maybe he’s got it hidden under the cloak, maybe he’s sitting on it, but he’s hiding that time loop spell. After Thanos heads to earth, the Stone has a time loop spell active and he doesn’t know he’s trapped in it. At some point in the future, it will reset time to the moment Strange cast the spell, on Titan before the Snap. The time loop is literally the “endgame” Strange refers to, as it was with Dormammu.

Thanos will, of course, figure this out and try to break the spell.

That’s where the time travel in the movie comes in, driven by Ant-Man, who has discovered how to use time vortexes in the Quantum Realm to get where and when you want to go. They can use the Quantum Realm to travel in both space and time, but using them can screw up the timeline and maybe destroy it. (The Time Stone, by contrast, can’t move you around in space, but we’ve seen it can reset time back to a particular point safely.)

The Avengers can then travel back in time, collect the Infinity Stones before Thanos can, make a new Infinity Gauntlet created by Shuri and Tony Stark, and have Captain Marvel use it to defeat Thanos because she’s the only one powerful enough to do it.

Got all that? If not, read all the details of his entire theory over at Reddit.