Study Finds That Certain Junk Food Is Just As Addictive As Drugs, Because The Universe Hates Us 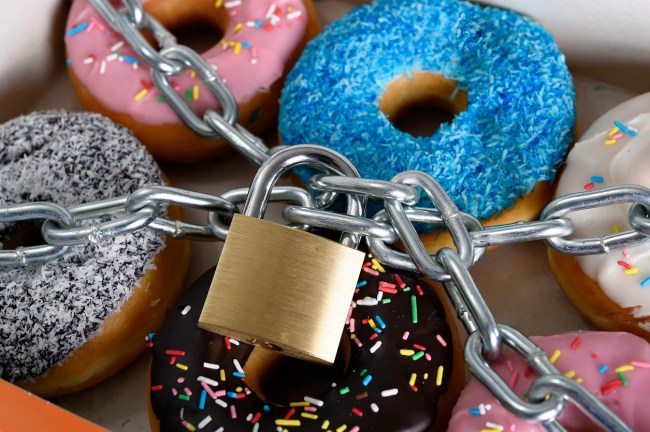 It always starts with the best intentions. A man, let’s call him Randy, heads down to his local market to stock up on healthy foods for the week. He’s a good boy, this one, spending a little extra time in the produce aisle to make sure he has plenty of leafy green vegetables and fruits to complement the chicken breast and salmon he already has in his basket.

Randy is onto something here.

Randy is convinced that with some planning, it will be easier for him to feast on foods that are more advantageous to maintaining his girlish figure than if he continues to rely on last-minute fast food choices once his old and rapidly expanding belly starts to grumble. Randy is proud of himself as he walks out of the store and into his new life as a health-conscious consumer.

Hell, we’re proud of Randy, too.

The first day of his well-thought-out feeding regimen goes off without a hitch. He’s now one step closer to looking like a Greek God before boating season. But then somewhere around the second or third day his desire to do better, his willingness to make healthier choices takes a shit smack dab in the middle of his plate, and the junk food junkie monkey comes lunging out from behind the refrigerator and starts humping his leg with extreme prejudice. That’s when Randy realizes that he doesn’t want to eat fucking poultry and fish for dinner every night – fuck, he’d be okay with never consuming that boring shit ever again — and those vegetables, well, they sound just about as appealing as hanging out at a Japanese ass-eating cafe. Although he tries to stay strong and remain in control, Randy is no match for the mind fuckery of the pizza, tacos and burgers, Oh, my – gnawing away at his Hypothalamus. It all ends tragically once that bastard starts scanning the restaurant options available in his GrubHub app. Thirty minutes later, Randy is officially off the wagon.

Look, it’s not that Randy is any weaker than the rest of us. Most guys have fought this dietary battle enough times to know that none of us really stand a fighting chance at winning the war against our stomachs. They like what they like, and that isn’t the regular consumption of rabbit food, we can tell you that right now.

But this inability to control ourselves against the hedonistic cravings of junk food is not necessarily a character flaw, according to the findings of a new study. As it turns out, high-calorie, processed shit cuisine – all of the stuff we love to devour — can lead to an addiction that is just as powerful as some drugs. That’s right, boys, science has found yet another way to ruin our fucking lives.

Researchers with the University of Michigan and the New York Obesity Research Center have discovered that foods like pizza, chips, cookies and ice cream are problematic for the overall health of the human race because they lead to addictive-eating. The study, which was published in the journal PLoS One, finds that the level of processing that goes into these types of foods – fats and refined carbohydrates — is ultimately what sinks its claws into our brains and turns us into disgusting, bloated junkies. Basically, the chemicals used to make these foods appealing to the masses, to help seduce our taste buds, creates a primordial urge that is not too dissimilar from the Hey, buddy, I’ll blow you for some of that crack mentality that drug addicts can experience in times of desperation.

“The foods we often tend to overeat and feel compelled to eat might have those effects on our behavior because of something about them is causing addiction-like changes in our behaviors,” study co-author Nicole Avena told Global News.

Other foods are super addictive as well. Researchers say good luck loosening the fiendish grips of french fries, cheeseburgers, soda, cake, cheese and bacon. All of this processed sustenance is high on the list for creating addictive behavior. Their advice – and you’re going to fucking love this – is just to avoid buying processed foods at the grocery store and opt instead, just like Randy did at the beginning of this story, for culinary options that do not cause addiction, like carrots, rice and beans.

“For the average person out there shopping and trying to decide which foods are more processed than others, those that are shelf stable are likely to be more processed and contain additives and preservatives,” Avena explained. “Fresh foods, like fruits, vegetables, plain nuts, and meats, are better options as foods that are minimally processed.”

The best shot all of us have at combatting this madness, according to nutritional experts, is to avoid the social cues that bring on the desire to eat junk food. They say we must find ways to distract ourselves from those situations that make us want to overindulge in questionable food choices, especially during those dark times when we’re not even hungry. In other words, all of the Randy’s of the world are royally screwed. Well, fuck it, it’s not like we had a lot going for us anyway.

Here’s the best advice we can offer: If you ever get a hankering to slob someone’s knob for a slice of pizza, please call a friend.