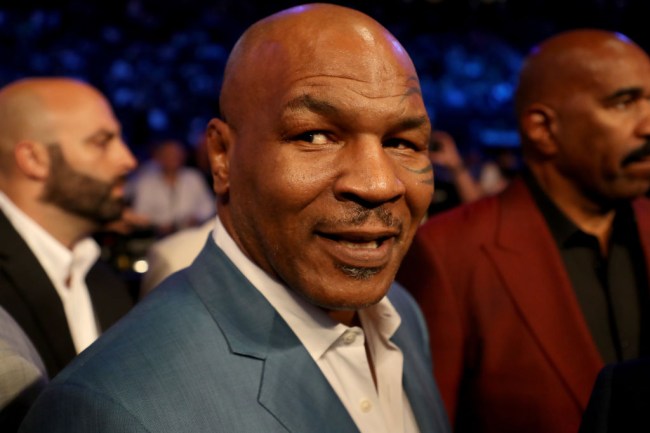 As marijuana becomes increasingly normalized, people are scrambling to get a piece of the action in the hopes of capitalizing on the cannabis boom—including a number of former athletes who have decided to get in on the game.

Last year, Lamar Odom revealed he was launching his own line of products, and after opening up a weed-friendly gym a few years ago, Ricky Williams decided to expand his incredibly on-brand empire by announcing he was doing the same in the form of a “health-conscious” weed company.

However, I’m not sure if there’s a bigger name to enter the space than Mike Tyson, a man who once smoked weed before a fight that he still managed to win in two rounds and has previously showcased his love for the drug in a number of ways—including chiefing a giant joint.

In 2017, the boxer broke ground on Tyson Ranch on a plot of land in California with the intent of creating a space where marijuana enthusiasts can flock to in order to educate themselves and, more importantly, get stoned out of their minds if they so choose.

Earlier this week, GQ provided a closer look at the project by catching up with Tyson to see what he has in store and, well, I think I know where I’m going on my next vacation.

According to the outlet, Tyson Ranch will span 418-acres (they apparently couldn’t track down another two) and feature an insane number of attractions including the world’s longest lazy river—it’ll take an hour to get from beginning to end—a concert amphitheater, and “glamping” grounds (if you don’t feel like “roughing” it, you can also stay at a luxury hotel that’s planned for the site).

You’ll be able to freely smoke on the ranch (unless you’re in an area where alcohol is being served), and while there will be an education center for growers, you won’t be able to find any plants on the farm itself—rather, Tyson is licensing out his name and allowing growers to use his brand to purvey their wares.

While Tyson Ranch is still under construction, a music festival was already hosted on the property back in February and the group behind the project say it’s only the beginning.

I look forward to experiencing what they have in store.