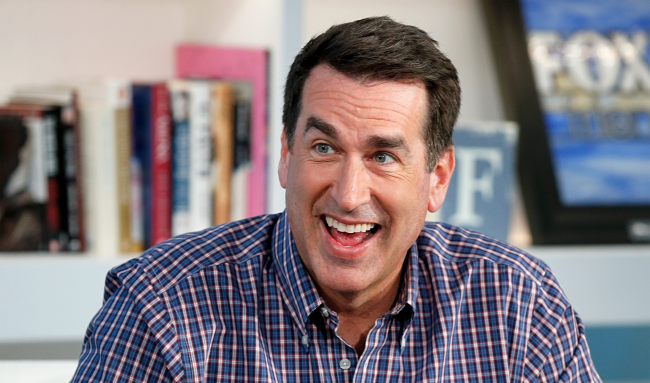 You know what? I think if I were famous I would just never get married. Or if I was already married then became famous, I would immediately get a divorce.

I’m not saying I wouldn’t have a partner. I’m just saying that if you’re famous and your marriage falls apart, then the divorce has a very good chance of becoming very public and very weird.

The lessons I have learned from people like Jay Cutler, Dr. Dre, Bill Gates, Jeremy Renner, Jim Edmonds, and others are just so embarrassing.

Take, for example, comedian Rob Riggle and his wife Tiffany.

The 51-year-old Riggle is currently going through a divorce and because basically everything submitted to the court is put into the public domain the details of the proceedings are now hitting the internet. And once again, it’s an ignominious affair.

According to TMZ who obtained the legal documents from the Riggle divorce, Rob is accusing his wife of 21 years of hacking him, taking his cash and spying on him using a hidden camera.

According to the docs … Riggle was staying at their smaller home, while Tiffany stayed with their 2 kids at the family home. He says he confronted Tiffany about the $28k because she had access to his pad, but she denied knowing anything about it.

Around the same time, Riggle alleges Tiffany hacked into his Apple account and downloaded his emails, texts, contacts and photos … but then he says things got really strange.

Riggle claims Tiffany somehow had knowledge of private conversations he’d had in his home office either with or about his girlfriend and assistant, and she — or other anonymous sources — would text or email them referencing the private info.

Now get this… Riggle and his girlfriend, suspicious of being monitored, made up a whole fake conversation just to see if Tiffany would repeat any of the information or if it would be leaked. He claims it worked.

Riggle also says in the court docs that he had his house swept for devices and discovered a hidden camera in a smoke detector with more than 10,000 videos, with sound, on the camera’s memory card.

Even more bizarre, Riggle says one of the videos shows Tiffany on a ladder installing the camera, while another video shows her sitting on the floor of his office counting money – the $28,000 he says went missing.

As a result of these claims, Riggle has been granted a temporary restraining order against his estranged wife. They are due back in court in July.