Aaron Rodgers To The 49ers? Chris Simms Thinks It Absolutely Needs To Happen Next Season 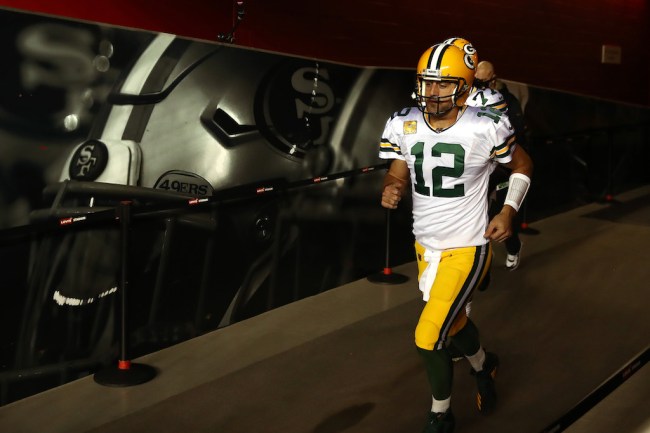 Aaron Rodgers has guided the Green Bay Packers to 6-2 record so far this NFL season, with the future Hall of Famer putting up MVP-like numbers once again, having already passed for 24 touchdowns compared to just two interceptions. So, even at 36 years old, it doesn’t appear as if the quarterback is showing signs of slowing down anytime soon.

However, we all know the Packers did the unthinkable during the 2020 NFL Draft by selecting Jordan Love in the first round, which, presumably, added a lot of tension within the franchise. Like, instead of adding weapons for Rodgers, Green Bay chose the dude’s eventual predecessor. Strange, right?

As one would imagine, Aaron Rodgers wasn’t too thrilled with the Love decision, even saying it led him to ripping shots of tequila and openly talking about his future — with the quarterback admitting it may not realistically be in Green Bay. Uh, that’s not what any Packers fan wants to hear. And while Rodgers seems to have gotten more comfortable with mentoring Love, that doesn’t mean all the hard feelings are mended and he’s content in Green Bay.

NFL analyst Chris Simms has some thoughts about Rodgers’ future, and he recently talked about the team that offers a perfect fit: The San Francisco 49ers.

Talking to NBC Sports Bay Area, Simms says that teaming Aaron Rodgers with Niners head coach Kyle Shanahan would be a “perfect fit,” and that the same team which once passed over the quarterback in the 2004 NFL Draft should do what it can to acquire him over a decade later.

“I think the 49ers would love to have Aaron Rodgers,” NBC Sports’ Chris Simms told NBC Sports Bay Area. “I don’t think there’s any doubt about that. I mean, he would be the perfect fit for Kyle Shanahan’s offense. Really, Aaron Rodgers fits in any offense. It doesn’t matter. We’re talking about, in my opinion, the greatest quarterback I’ve ever seen in my life.

“It’s the greatest quarterback of all time — that’s how highly I think of Aaron Rodgers. And I know a lot of people will go, ‘Well, what about Tom Brady? He won six Super Bowls.’ Well, I think if Aaron Rodgers is on New England, they would have won more than six Super Bowls. That’s just the way I feel about him.”

Rodgers is from Northern California, so playing for the Niners would be a return home for him. But is it really a possibility? Simms might think the signal-caller would be great in Shanahan’s system, but it’s hard for him to imagine the Packers are just going to give away their superstar quarterback — even with Love waiting in the wings.

San Francisco’s been nailed by injuries this season, and looks nothing like the defending NFC champs. But with their shaky quarterback situation — and rumors flying that incumbent Jimmy Garoppolo could be on his way out after this season — maybe the team goes all in and chases an Aaron Rodgers trade. It’s something to keep an eye on, because, as weird as it is to think about, we’ve already seen Tom Brady leave New England, so, hey, anything’s possible.