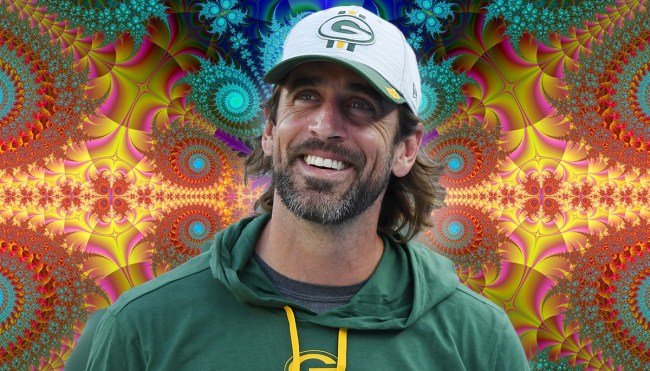 Aaron Rodgers has been on a fairly long, strange trip over the past year or so thanks to the many, many ways he’s managed to routinely make headlines, including a mysterious toe injury, an insane amount of drama surrounding his vaccination status, and more than a few developments in his personal life that have made for textbook tabloid fodder.

The Packers quarterback was in a relationship with actress Shailene Woodley that came to an end earlier this year before he became romantically linked with a woman known simply as “Blu,” the co-founder of “a modern mystery school for women” who has publically denied claims she practices witchcraft (which is exactly what someone who’s actually a witch would say).

That last development seems inextricably linked with Rodgers’ decision to embrace his headier side, as he’s routinely channeled his inner hippie while speaking with the media, embarked on a 12-day cleanse inspired by Indian medicine that involves oil enemas and bloodletting, got the kind of tattoo you’d expect to find on someone capable of explaining the concept of astral planes, and presumably gotten way too into the band Tool.

Rodgers also managed to turn plenty of heads earlier this month when he gave an interview where he talked about the role psychedelics have played in maintaining his mental health and admitted to using ayahuasca (a plant containing DMT that can be used to induce severe and often life-changing hallucinogenic experiences) during a trip to Peru a few years ago.

That revelation led to many people wondering if the NFL could potentially punish Rodgers for violating the strict substance abuse policy that’s significantly impacted the careers of players like Ricky Williams and Josh Gordon as well as the many others who’ve been disciplined over drug use.

However, according to Pro Football Talk, Rodgers is in the clear.

The outlet spoke with representatives for the league and the NFLPA who told them the QB is immune to any punishment because DMT “counts as neither a prohibited compound under the substance-abuse policy nor a PED.”