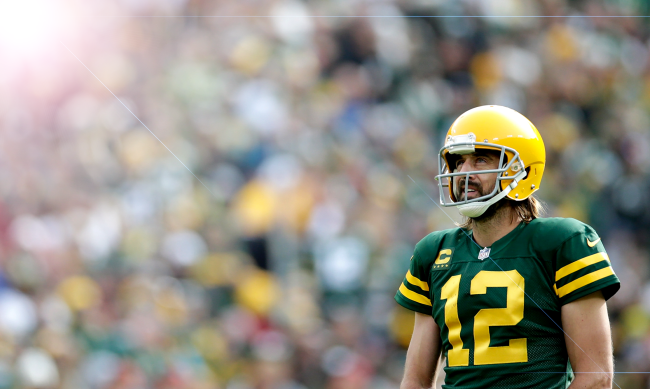 Aaron Rodgers has found himself in the center of a storm ever since he tested positive and was forced to miss Sunday’s Packers game versus the Chiefs.

That storm was only fueled after the quarterback gave a bonkers interview on The Pat McAfee Show in a misguided attempt to defend his actions.

Everyone from Bill Simmons and Stephen A. Smith to the NFL on Fox studio crew, Kareem Abdul-Jabbar and Howard Stern has weighed in and lambasted the 2020 NFL MVP.

Rodgers, who obviously thought his appearance and lengthy diatribe on The Pat McAfee Show would smooth things over, was terribly, terribly mistaken.

On Monday, a new report by People reveals that Aaron Rodgers is “upset” with all of the negative reactions to his numerous unsubstantiated claims.

The source says that Rodgers “feels like he just shared his point of view, and now he’s being crucified for it.”

“He knew some people would disagree with him, but he didn’t know that it would become the s—storm it became. People who he thought were friends are turning on him,” the source tells PEOPLE.

“He’s upset,” the insider adds. “He’s very unhappy with the response to him.”

This same source also pointed out that not only did Aaron Rodgers consult with his “now good friend” Joe Rogan he also spoke with actual doctors.

The source tells PEOPLE that “of course Joe Rogan wasn’t the only one who he consulted. He’s talked to medical professionals, too.”

“Aaron feels like he’s an athlete, he knows about his body more than most people, and he made a choice for himself,” the source says.

One has to wonder if Rodgers himself is that “source” at this point in the proceedings.

The fact that Rodgers — who does nothing accidentally — has leaked his viewpoint to People.com underscores a topic from Monday’s PFT Live. Although the chances of it happening remain very low, there’s a soft blip on the edge of the radar screen that bears watching over the next few days. Given the torrent of criticism, the looming NFL discipline, and the inevitable mandate from 345 Park Avenue warning Rodgers that he must comply with mask requirements or else, Rodgers could be thinking about calling it quits.

Related: A Timeline Of NFL Fans Doing An About-Face On How They Feel About Danica Patrick Thanks To Aaron Rodgers

Packers head coach Matt LaFleur has said that if Rodgers clears protocol this week he will be eligible to return to the team on Saturday and will start the game against the Seahawks even though he will not have practiced for it.