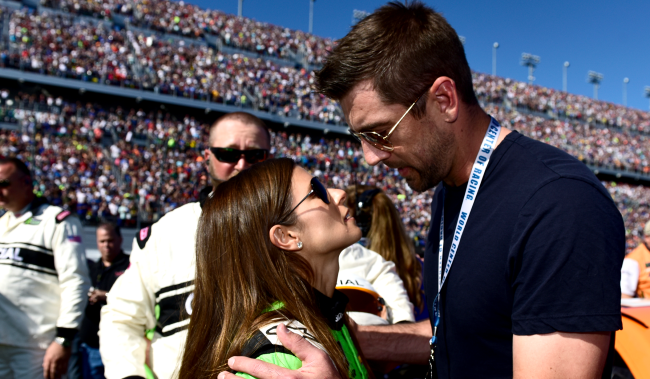 For years, every time Aaron Rodgers had a bad game while also having a famous girlfriend, like Danica Patrick or Olivia Munn, Green Bay Packers and other NFL fans wondered if that relationship was a contributing reason for why it occurred. One can certainly debate the rights and wrongs of that perception, but it happened.

Not that all three of them didn’t invite criticism. Both Munn and Patrick have been referred to as selfish and narcissistic at various times in the past, as has Aaron Rodgers, and as a result their relationships at times seemed like matches made in heaven.

While they were dating, Olivia Munn talked about having sex with Rodgers on game days and were mocked for doing things that appeared on social media like lip syncing Mariah Carey and Boyz II Men and re-enacting scenes from The Princess Bride And Training Day.

Munn was also reportedly at the center of his feud with his family.

Naturally, Rodgers’ failures in games was all Munn’s fault.

There is no doubt it's all Olivia Munn's fault. There are none doubts.

She also wasn’t shy about firing back at critics of her relationship with Rodgers either.

It was around that time that Aaron Rodgers started to get a reputation for “going Hollywood.”

After they broke up, Munn discussed what she called a toxic relationship she had in the past where this particular former boyfriend made her feel “worthless.” Many just assumed it was Rodgers she was talking about.

NFL fans eventually went on to have a slight change of heart about Munn after she opened up with portions of her side of the story.

They too shared TMI providing much fodder for jokes on social media, including the fact that they reportedly bought a oceanside mansion together with $28 million in cash.

But then, Aaron Rodgers and Patrick broke up, reportedly after he did her dirty by hooking up with actress Shailene Woodley when it was reportedly Patrick that introduced them to one another.

Fast forward around eight months and Rodgers shocked the sports world when, during his NFL MVP acceptance speech, he revealed that he and Woodley were engaged.

Following his usual modus operandi, Rodgers and Woodley went on a spree of sharing too much information, saying numerous bizarre things, and plastering themselves all over social media.

Rodgers skipped the Packers’ OTAs because he was too busy growing a man bun and singing and dancing with Woodley and actor Miles Teller in Hawaii.

So, naturally, NFL fans were eager to see how Rodgers’ latest unusual relationship would affect him during the 2021 Packers season.

Everything was going very well for the 37-year-old quarterback as the Packers were 7-1 and in the driver’s seat for the only bye in the NFC playoffs.

Then he got COVID after saying he had been “immunized.”

Then he went on The Pat McAfee Show.

And then people started blaming Shailene Woodley and her well-chronicled crunchy granola approach to healthcare for Rodgers’ positive test.

On the flip side, however, suddenly the same fans that had been critical of Olivia Munn and Danica Patrick in the past had found a little more sympathy for the ladies.

What is evident is that both Olivia Munn and Danica Patrick narrowly missed being brought down by this narcissist. Presume they are both very happy and relieved.

Let me apologize to Olivia Munn and Danica Patrick for thinking they may have been the cause of the Aaron Rogers break up.

I get it now. Hard to live with a narcissist deceiver.

Welp. When Danica Patrick said she had a relationship with a narcissist, we now have proof with was @AaronRodgers12. So disappointed with him as a @packers fan… https://t.co/NAkV2zMhgL

Danica Patrick got out of town at the right time!

I was pulling for Aaron Rodgers to beat all of Brett Favre's records at Green Bay,but now I don't care if He ever plays another down, he's a lying scumbag as far as I'm concerned and Danica Patrick dodged a bullet by getting away from a guy.

Look, if Danica Patrick thinks you are an insufferable ass hole then you are a special kind of ass hole. 🤷🏻‍♂️