Alliance of American Football Being Sued By Man Claiming League Was His Idea, Wants 50% Ownership 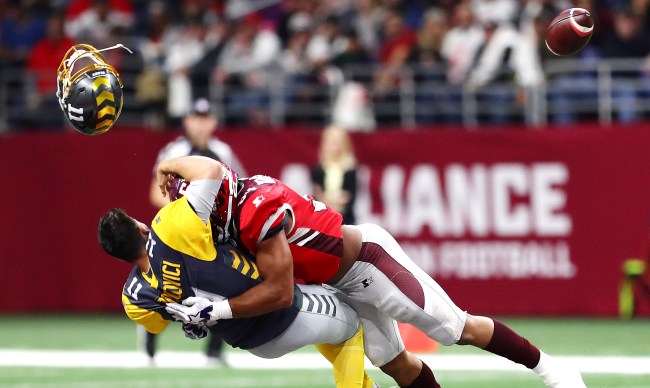 The fledgling Alliance of American Football has certainly gotten off to a very interesting, if not entertaining start.

The league has fined a player for spiking their really expensive football into the crowd.

They’ve had a player arrested in a prostitution sting. (A future star in New England, perhaps?)

One of their announcers, former Bengals head coach Marvin Lewis, was mercilessly mocked by the internet after his broadcasting debut.

On the plus side, fans really love the AAF’s alternative to onside kicks.

Now, however, the Alliance of American Football is being sued by a man named Robert Vanech who says he came up with the idea and is owed 50 percent ownership of the league, repayment of financial damages, and public acknowledgment of his role as a co-founder.

In a lawsuit filed on Friday, Vanech, the co-founder and CFO of Trebel Music, said he had a “handshake agreement” with AAF co-founder Charlie Ebersol.

ESPN also reports the suit claims that “Vanech was the one to first approach Ebersol about the idea in February 2017 and proposed a business including football, a mobile app, gaming and real-time biometric data that the Alliance now has created.”

The lawsuit alleges Ebersol wanted to get licensing from the WWE and NBC to use the XFL name and to try to get them to invest.

The suit claims Charlie and his father, Dick Ebersol, met with WWE chairman Vince McMahon in May 2017. Dick Ebersol was McMahon’s partner in the original XFL and is a longtime television executive. No deal was agreed to in that meeting. Eventually, McMahon started a new XFL on his own; it is expected to debut in 2020.

Vanech alleges that soon after the meeting, Charlie Ebersol and Vanech got in a disagreement about whether they were in business together. Ebersol said they were not. Ebersol also disputed, in a text exchange that is part of the suit, whether or not a handshake happened. Vanech alleges Ebersol then cut off communication with him.

“Mr. Vanech’s claim is without merit. There was never any agreement, oral or written, between Mr. Vanech and Mr. Ebersol relating to The Alliance. We remain focused solely on our historic, inaugural season when each weekend over 400 players get an opportunity to showcase their talents and fulfill their dreams of playing professional football.”

Such drama. You would think this new sports league is trying to be the NBA or something.