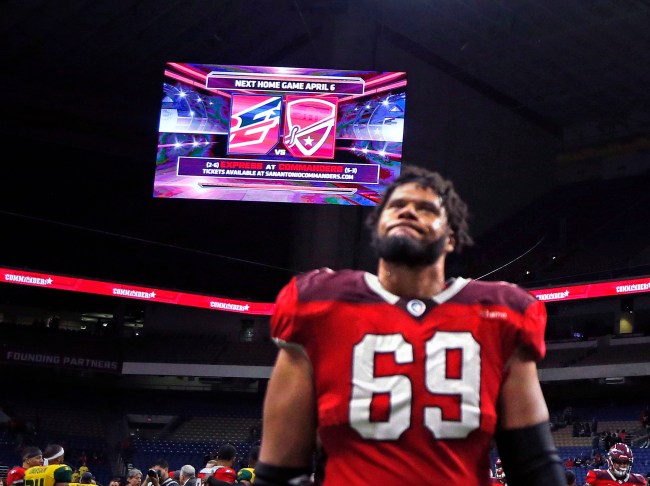 The Alliance of American Football (AAF) abruptly closed up shop in April, which left players, coaches and team employees with horror stories when it came to how they were treated following the announcement. While the league was, presumably, pulling in solid ratings, the AAF just couldn’t turn a profit, with each week bringing more reports that made it appear as if the league was in serious financial trouble. In the end, eight weeks of the Alliance of American Football is all football fans eventually got.

While the demise of the league has been well-documented, Sports Illustrated just published a piece entitled “More Strange Tales from the Collapse of the AAF,” which goes in-depth about some of the behind-the-scenes things that happened during and after the league folded. One of the more interesting things mentioned in that story? The former video and football operations employee with the San Antonio Commanders, Brad Sternberg, briefly describing the wild amount of looting that happened following the announcement that the league was ending.

For Sternberg, it was startling to see how quickly the atmosphere bottomed out. After the AAF closed up, he says, one employee from each team was retained, for a small bonus, to recoup that franchise’s physical assets—hardware such as cameras, computers and televisions—and return them to the Alliance’s warehouse in San Antonio. That task proved more difficult than expected, though, because some of those assets started making their way out the door the day the AAF was shuttered.

“I watched the biggest loot-fest I’ve ever seen,” says Sternberg. “Cameras disappeared. Flat-screens. I watched a f-cking full-time coach walk out of the building carrying a 55-inch TV. I watched people carry printers out. It was unbelievable.”

That’s a pretty interesting visual from Sternberg. It’s like a scene from a movie where there’s nothing but chaos happening and grown-ass people are acting like animals being let out of their cage for the first time. And, if Sternberg’s recount is accurate about a head coach leaving with the TV, the Commanders’ were coached by Mike Riley, meaning that dude just made out with a new big-screen; which is awesome.

Among other stories included in the Sports Illustrated piece about the Alliance of American Football are things like AAF co-founder Charlie Ebersol paying Marshawn Lynch $5,000 in quarters to shoot a commercial that never aired, as well as Bill Murray ghosting the league when asked to film a commercial during the Super Bowl broadcast. Overall, the league seemed doomed from the start, but, hey, at least it gave us a brief Johnny Manziel return and some cool new rules that could make their way to the NFL, right?

You can read the full piece about the Alliance of American Football over on SI.com.