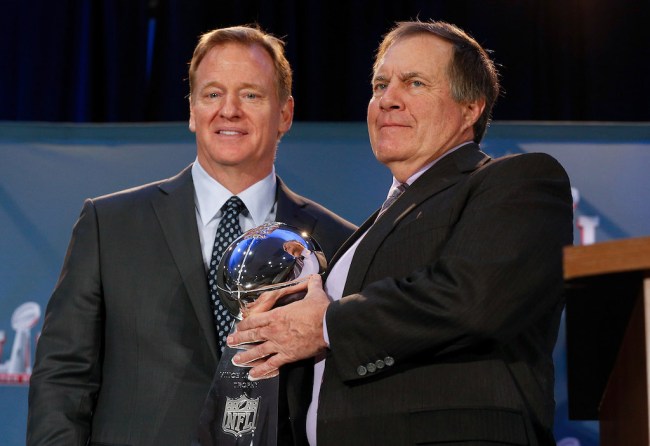 When you come at Bill Belichick, you better be prepared for the fearless leader of the New England Patriots to fire back with something (presumably) petty, because the dude has as successful a resume as any head coach in NFL history. And because nobody likes to be challenged — especially when you’ve had the accomplishments Belichick has had over the past two decades — when a reporter tried to expose the head coach for some of his recent failures in the first round of the NFL Draft, it ended up pretty poorly.

During a video conference Friday, Belichick was simply asked about the lack of recent success of some of his draft picks. Instead of answering, he deflected — but not before making a major point.

“I’d say the most important thing to me is winning games,” he said. “I am not going to apologize for our record over the last 20 years. I’ve seen a lot worse.

“Ultimately, we try and put the best team on the field that we can to be competitive and I don’t really see that changing. Whoever those players are or aren’t, that’s the responsibility I feel to the team is the competition plays itself out and the better players play, whoever they are.”

A follow-up question was asked if the success via the draft has been what he had hoped since 2014?

“Honestly, my focus has been on the Ravens right now,” Belichick said. “Drafting scorecard, which I understand you want to write about that, which is great, but really trying to focus on getting ready for the Ravens. I think I will leave my attention on that.”

What a major Belichick move by dropping a quick little “oh… in case you forgot” reminder on this reporter about all the success he and his team have accomplished in the past 20 years. Like, you’re coming at him? The head coach is pretty sure he doesn’t need to defend himself over issues like recent draft failures.

Now, truth be told, the Patriots haven’t been great at choosing players in the first round in the past five drafts or so. Names like Isaiah Wynn (Round 1), Sony Michel (Round 1) and N’Keal Harry (Round 1), to name a few, probably stand out to fateful Pats fans. Seeing as how neither of those three have made a lasting impact on the team yet is a little mind-boggling, especially since they’ve had opportunities.

Still, seeing Bill Belichick try to own this reporter is amazing. He immediately downplays the question by flexing hard AF about what he’s accomplished in the past 20 years — which includes nine Super Bowl appearances and six titles. That’s unheard of, and the head coach clearly didn’t seem to appreciate the reporter focusing on failed draft picks over the past few years.

That said, if Belichick’s willing to tout his all rings and not-so-subtly tell the reporter to check his stats, then the head coach should be held responsible for his poor draft record in recent years. The reporter checked the same stats there and, well, they aren’t a great success.

It’s easy for Bill Belichick to still remind everybody that he’s Bill Belichick, but the fact of the matter is the Pats have looked pathetic so far this NFL season, and don’t look like the team everybody’s used to seeing. A lot of that is due to poor player development — AKA poor drafting. The head coach can puff his chest out about what he did with Tom Brady as his quarterback, but those days are over, so now he’s seeing what it’s really like to be criticized for some poor decisions over the years that were often overlooked because of his team’s success.