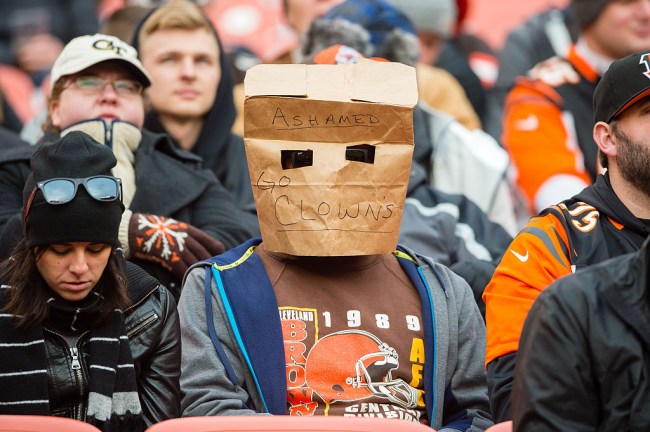 There are over 171,000 words in the Oxford English Dictionary, and despite centuries of progress, there is still not a single one that exists to describe just how bad the Cleveland Browns are at football.

How bad are the Browns? One of my favorite examples is that one coach said he was so traumatized during his time there that he lost the ability to see colors or smell.

If you’re looking for more evidence, I’d direct you to the parody of the intro to The Office, that the team put together last month, which was easily better and more entertaining than anything the team has done on the field in the past two years.

That should tell you about all you need to know.

The Browns have managed to win a single game over the course of the past two miserable years, including a perfectly imperfect 2017 that saw the team go winless and resulted in Hue Jackson jumping into Lake Erie to try to wash away his coaching sins with raw sewage and industrial waste.

However, you have to give Browns fans credit for managing to stick with the team (and turning a steady stream of negatives into at least one positive). Being able to stick with a team like this takes loyalty— and, in most cases, a bunch of alcohol.

Bud Light was nice enough to help out Browns fans on that end by shipping a bunch of beer to the city (much like they did in Philly after the Eagles won the Super Bowl), only they won’t be able to use this delivery to drown their sorrows.

No— if Browns fans want to take advantage of the “Victory Fridges” that were recently installed around the city, they’re going to need the team to do something they haven’t done since 2016: win a game.

JUST IN: Starting today, @budlight is installing “Victory Fridges” that will be full of beer in 10 Cleveland bars. When the Browns win first regular season game, fridges unlock and beer inside is free to fans. pic.twitter.com/DkRWkVkLkx

I hope Bud Light has a pretty good shelf life.