With Bill Belichick Reportedly Raving To Everybody About Cam Newton, Could Patriots Bring Back QB This Offseason? 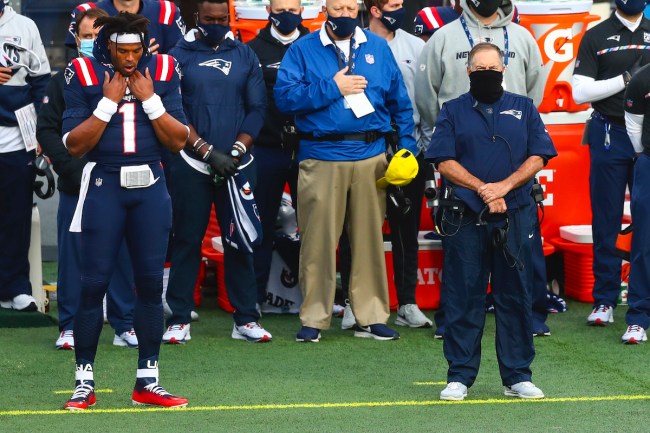 After seeing Cam Newton struggle alongside Bill Belichick during his lone season with the Patriots, many believed that the project of trying to rejuvenate the former MVP was over. In fact, early reports this NFL offseason claimed that the Pats and the quarterback had already mutually split, leading the former No. 1 overall pick towards free agency.

But maybe those reports were premature, because it seems as if Belichick is actually enamored with Newton, and, per Ben Volin of The Boston Globe, is raving to pretty much anybody willing to listen about the quarterback. Here’s what Volin recently reported when discussing the upcoming NFL offseason, and some of what he’s hearing about the Patriots’ search for a starting quarterback.

“Multiple sources who have spoken with Belichick this offseason said he does nothing but rave about Newton and the effort the quarterback put forth in 2020. The only problem Belichick is concerned with is Newton’s arm strength, with Newton having suffered multiple shoulder injuries in the last five years.”

Volin also reports that while Newton could return to the Patriots, his contract would have to be cheap. Also, the Patriots could still select a quarterback early in the 2021 NFL Draft if they do bring Newton back.

This is actually an unbelievable development, and obviously positive news for Cam Newton — who, last we saw, was trying to defend himself against taunting high school kids a couple weeks ago. The fact that he could find himself reunited with Bill Belichick with an opportunity to start for the Patriots again is nothing short of remarkable. Not because the 31-year-old doesn’t still have talent, but, as Volin reported, because Newton’s arm strength last season looked pathetic, which is why New England primarily used the quarterback more as a bullish runner than anything else.

In an NFL offseason that is full of rumors — particularly when it comes to the quarterback market, with ESPN’s Adam Schefter believing as many as 18 players at the position could change teams in the coming months — nobody knows for sure what is and isn’t truth. We do know that Cam Newton has gushed about his time alongside Belichick, and, if Volin’s report above is true and the head coach really is returning the favor and raving about Newton, maybe each side decides the rejuvenation project is worth one more season.

The Patriots are completely lost at quarterback right now, with Belichick not particularly sure what he’s got on the roster in terms of a starter. Jarrett Stidham doesn’t necessarily sound like he’s the answer. Cam Newton played through nagging injuries last season. And the NFL Draft is always a crapshoot in terms of what’s available. So, who knows? Maybe a reunion between Newton, Belichick and the Pats is actually what’s best for everybody right now.