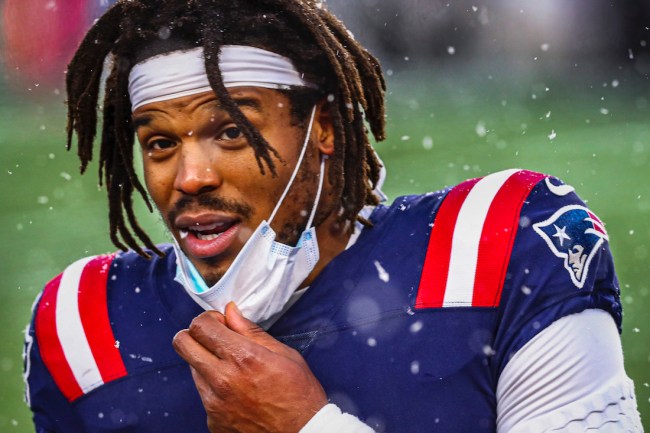 When Cam Newton re-signed with the New England Patriots this NFL offseason, it was probably a little bit of a surprise to many. After all, the former league MVP didn’t exactly impress in his first season in Foxborough, throwing only 8 touchdowns and 10 interceptions as the Pats stumbled to a 7-9 record. Sure, Newton still flashed a dynamic style of running the football — and scored 12 rushing touchdowns — but the thought was that both sides would mutually decide to split up.

That all changed at some point this offseason, though, as both Newton and Patriots head coach Bill Belichick continued to compliment one another, talking about the respect each had for the other. Eventually, a deal got done, with Cam Newton re-signing for one year — which could ultimately turn into $13.6 million if he hits a bunch of incentives.

One person who isn’t thrilled with the decision to bring back Newton is some Boston-area radio personality named Tony Massarotti, who co-hosts the show “Felger and Mazz” on 98.5 The Sports Hub. On Thursday, he discussed the Patriots’ decision to re-sign Cam Newton, and didn’t hold back in giving his opinion about the move.

“The story is that the Patriots have put themselves in a position where with holes all over their roster and tremendous needs, the best they could do is bring a washed-up quarterback and put him on the roster in an attempt to lure free agents. That is the story,” Tony Massarotti said. “I don’t know if Cam Newton’s going to start for this team or not. I hope not. I doubt it, honestly. I have to believe that sometime around the draft, someone else will shake free. Even if it’s Gardner Minshew, he’s better than Newton. So, to me, it’s not that Cam Newton’s going to be the quarterback in 2021. I’m not making that judgment today. Maybe he is. I don’t know.

“But the judgment I am making today is ‘Wow, you’re a storied franchise coming off of the most dominant dynasty in the history of sports and this is what you’re reduced to?’ This is what ‘leverage’ you have? You have no leverage. You’ve never had leverage since Brady left. You’re in a position where you are desperate and you have no plan and you’re only shot is to bring up a washed-up has-been in hopes of signing free agents. That is the story.”

Calling Cam Newton “a washed-up quarterback” who was put on the roster to “lure free agents” is quite the hot take from Massarotti. Sure, the first year of the experiment between the signal-caller and the New England Patriots didn’t seem to work out, but last year’s NFL season was a complete mess due to COVID, so it was extra difficult for a player to change teams and learn a new system. Add in the fact that Newton was playing well before testing positive for the coronavirus, and things only got more challenging for him.

Plenty of Patriots fans probably feel similar to Tony Massarotti about the team re-signing Cam — because the guy just looked battered and worn down at times last season. But with a full NFL offseason coming up and more time to learn Bill Belichick’s system, who knows, maybe Newton returns to Pro Bowl form? Nearly 32 years old with several lingering injuries, it may be a do-or-die year for him, so he probably feels the pressure to perform at a high level. If he does, the contract is a bargain for New England. And, if he doesn’t, the investment isn’t all that expensive for a starter in the NFL.