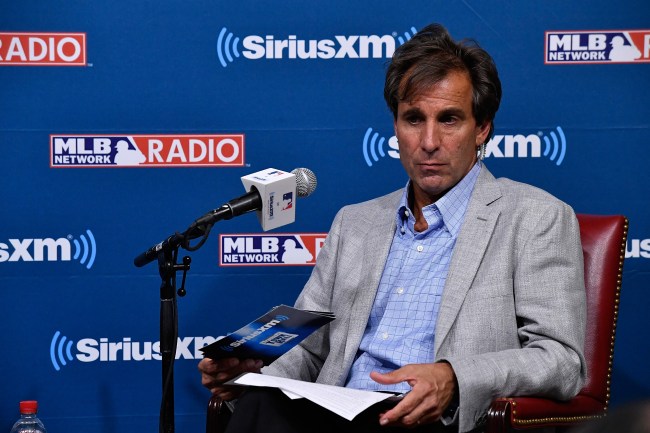 Chris “Mad Dog” Russo has had one of the loudest mouths in sports radio for the past 30+ years, so it’s safe to say the dude knows a thing or two about yelling about his opinions into a microphone. And, while the longtime radio host has made a living being himself and giving hot takes on air to sports fans, that doesn’t mean he hasn’t had his fair share of criticism from doing it.

As most of us know, any hope of having an MLB season is all but lost at this point. Owners want to pay players less money, while the players (naturally) want more money. Forget the logistics or health concerns associated, both sides can’t even agree on the length of the season — which would seem like the natural place to start negotiations. It’s a complete shitshow, to say the least.

Well, Chris “Mad Dog” Russo found the dysfunctional negotiations as a perfect place to give a scorching hot take, claiming he’s sick of MLB players who are complaining about wanting to play baseball, but who are “underperforming” their massive salaries — with Russo specifically calling out Bryce Harper and Trevor Bauer. Take a listen below at the rant.

I'm not interested in hearing from @MLB Players tweeting that they are ready to go, especially the ones that have under-performed their contracts! pic.twitter.com/c7reQNxRqV

Now, Chris “Mad Dog” Russo has the right to his opinion, but, man, he’s a little off when it comes to this latest take. Harper may not have made the All-Star Game in 2019, but the dude still did bat .360 with 35 dingers, 114 RBI, so it’s not like he was a waste in the Phillies’ lineup. And, sure, Trevor Bauer’s a bit of a head case — and he only won 11 games in 2019, posting a 4.48 ERA between two teams — but he did finish sixth in the AL Cy Young Award voting in 2018, and has shown he’s more than dependable as a starter in the league.

Given Russo’s blasphemous comments, Twitter had plenty of reactions, many of which dogged the “mad dog” for not knowing what in the hell he was talking about. Take a look below at some reactions from social media.

Agreed. Get this clown off the air @MLBNetwork. Has to scream at the top of his lungs just to express his extremely bias opinions. We need more of @DALLASBRADEN209 and less of this clown!

Haha @mlb should block him

Chris, this is not only in bad taste, but something you should consider for yourself….

Do America a favor and stop talking. Like, yesterday.

Regardless of your opinion about Russo’s take here, there’s one thing that’s never up for debate: The dude sure knows how to give an impassioned rant, doesn’t he? If there’s one person who can wake up a sleeping giant in order to debate sports, it’s this fucking guy. And, while it’s a bad look to have a guy going in on players and baseball in general on the MLB Network, at least he isn’t giving listeners the same PC crap that they usually get. That’s got to count for something.