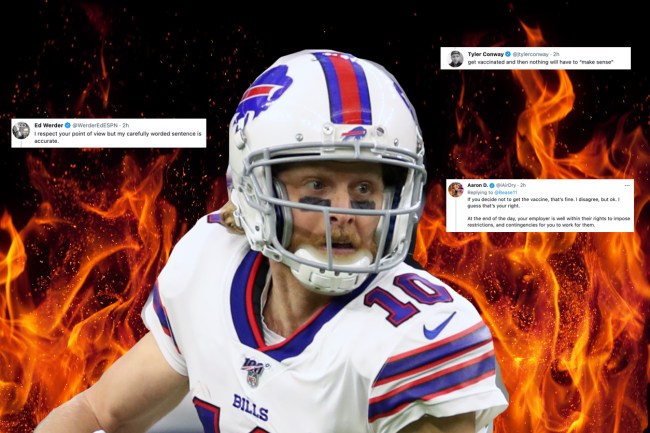 At the time of this writing (Thursday at noonish), the Bills receiver has shot off 18 tweets, most within the span of two hours.

I think this is what the kids call ‘waking up and choosing violence.’

Beasley, who must be extra spiced up after being sent home to quarantine for five days despite testing negative for the virus (and being in contact with a vaccinated trainer who tested positive), initially came to the defense of teammate Isaiah McKenzie after the receiver was fined $14,650 for failing to wear a mask inside team facilities.

Don’t worry they got me too. But I was wearing a mask when I was in close contact with fully vaxxed trainer who tested positive and still got sent home. So what’s the point of the mask anyways? Meanwhile I’m here still testing negative and can’t come back. Make it make sense. https://t.co/VGzoy0ljb4

Let’s start off with a friendly exchange with Stefon Diggs about the absurdity of the fine and a touch of gun violence. 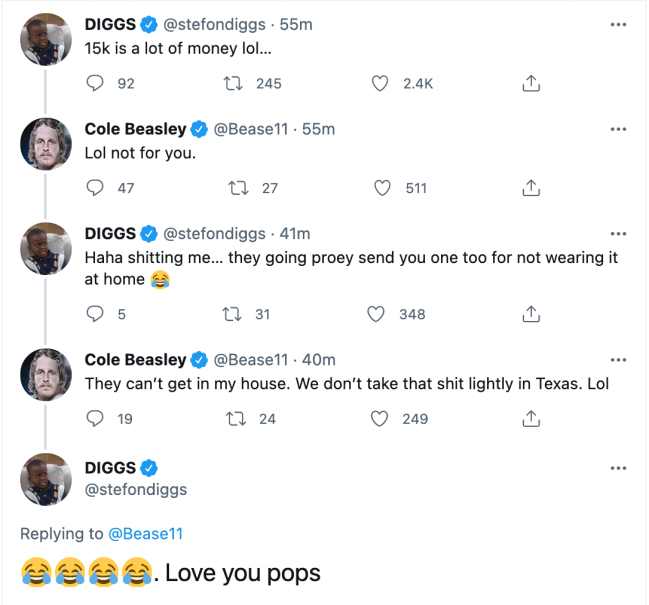 Beasley then revealed he too was fined for an innocuous mask infraction. 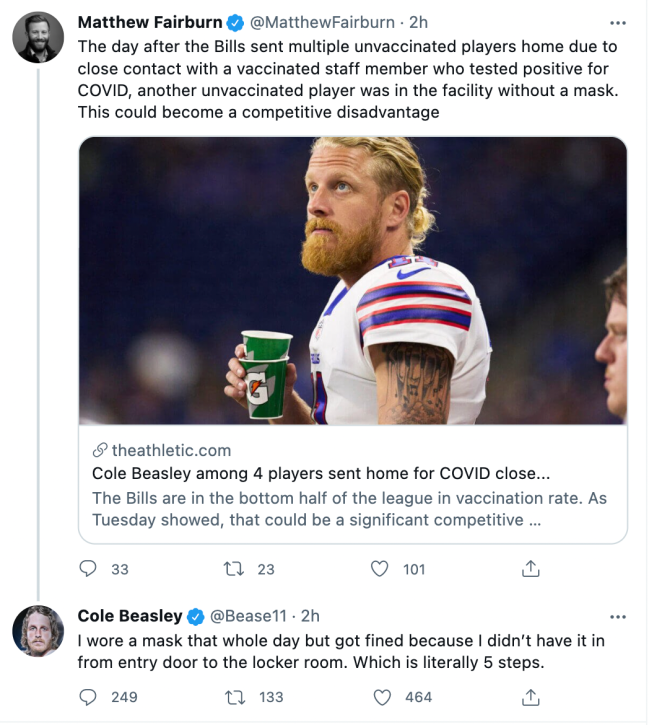 We then are allowed spectator access to the Battle of the Blue Checkmarks. Beasley spars with Bleacher Report’s Tyler Conway, whose online confidence allows him to accuse Beasley of being uneducated and afraid of needles.

What do I need to understand? It helps the individual. Not everyone else. So why do you care so much about what I do? Vaccinated still get it and spread it. If you’re getting depressed about something I’m doing that’s a “you” issue.

The two are showing no signs of finding common ground after Beasley questions the validity of a recent Newsweek article that purports ICUs in six states are over 90 percent full as the Delta variant surges.

Like I said I go by what I see. What people say and do don’t usually add up these days. Just look around.

Tyler then evidently goes a bit too far with a meme from the animated educational television series Arthur.

I attack your opinions. You attack me. Good for you.

Beasley points out that the NFL has had more outbreaks in the first two weeks of camp than Week 3 of last regular season.

point is NFL isn’t worried about protecting anyone. If that was the case vaxxed players would get tested everyday before entering like we do. They also would be wearing a mask. If I have to be sent home for close contact with vaxxed then why don’t they have to wear a mask?

Has anyone tried telling Cole Beasley they love him and care about him? Oh wait, this is the internet. Sharpen your arrows.

Im gonna exhaust all options before retiring and try to change as much as I can for the other unvaccinated players. They are not protected at all. They have to protect themselves from the vaccinated players and staff. Which is almost impossible since they’re tested 1/14 days.

Cole Beasley refuses to die from the vaccine, he has committed to perishing right here on this hill.