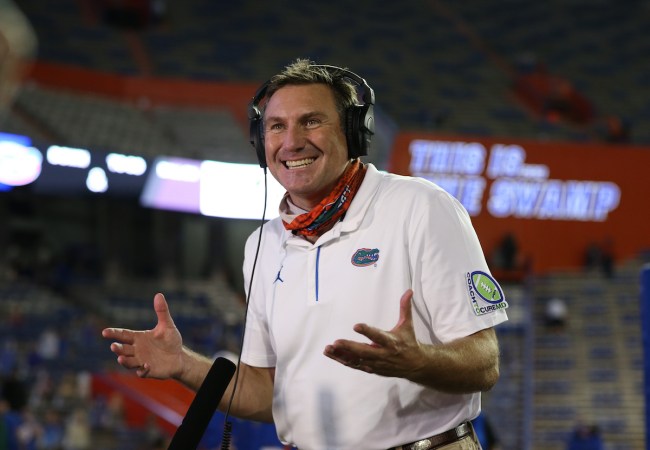 It’s already been a rough week for Dan Mullen and his Florida Gators. After losing in heartbreaking fashion to an underachieving LSU Tigers last weekend, the head coach looked like the ultimate sore loser by complaining about having to play games this season amid the pandemic, with other teams — notably Ohio State — seemingly being rewarded for not playing as many contests as other teams have this season.

Remember, this is the same Dan Mullen who, all season long, has been a bit out of touch with all that’s going on in this uncertain year, having previously campaigned to get his home stadium packed after the Gators’ first loss against Texas A&M, and then appearing to ignite a brawl between his team and the Missouri Tigers. To suggest Mullen seems out of touch with reality would be accurate — but that’s a conversation for a different day.

So how does one really get the best of a sore loser like Mullen? You mock the hell out of him, of course, which is what a Baton Rouge clothing store did after the Gators’ loss to the Tigers.

In case you missed it, during the final drive of that game, Florida DB Marco Wilson lost his mind and tossed the shoe of an LSU player for no reason whatsoever. The bonehead play cost his team 15 yards, which, ultimately, set up the game-winning kick for the Tigers. Brutal.

LSU was going to have to punt and then a Florida player threw this shoe. May have killed their playoff chances. One of the dumbest plays I’ve ever seen. pic.twitter.com/wIsllDFvQr

As if that whole thing wasn’t enough, LSU kicker Cade York gator-chomped in The Swamp to taunt Florida Gator fans, only adding insult to injury.

Cade York was chompin' through the fog after LSU's win over Florida 😆 pic.twitter.com/L5GNJkU8wB

And just when the head coach and his team thought that was the end of it, that Baton Rouge store, called Carriages Fine Clothier, had to really drive home the stake by offering a “Dan Mullen Discount” to shoppers, which mocks the coach and Wilson’s tossed shoe incident with a 20% off deal. Genius.

Carriages Fine Clothier in Baton Rouge is offering 20% off all shoes this week, but…

You gotta ask for the “Dan Mullen Discount.”

I’d really like to shake the hand of the store manager and congratulate him on one of the most perfect troll jobs of all-time. It only adds more insult to injury, and really proves LSU fans got the last laugh after their 24-17 victory over the Gators.

Look, this college football season hasn’t gone as expected for Dan Mullen and the Gators. In fact, one ESPN projection even deemed the SEC team as national champions, so the fact that the Gators aren’t in that conversation has to be disheartening. And, personally, seeing a store crap all over a guy like Mullen is entertaining, because he just seems to rub so many people the wrong way with some of his B.S. — so job well done by Carriages Fine Clothier.