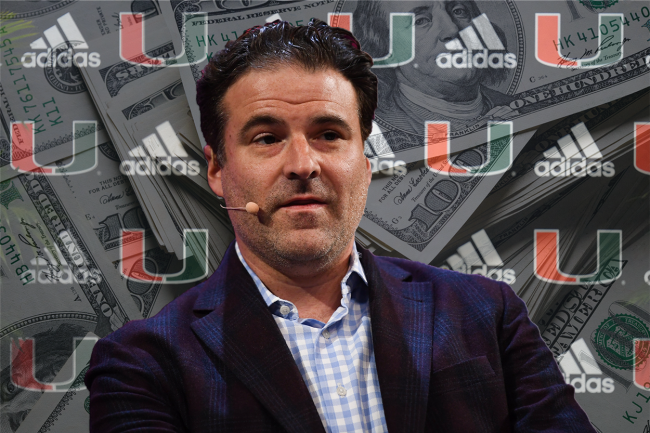 It appears as though Darren Rovell is just now finding out how college football works. The 43-year-old sports business analyst gets paid real life money to talk about the business of sports, but simply has no grasp on reality.

A group of boosters at the University of Miami have secured $10 million in funds to pay athletes in exchange for their names, images and likenesses. They announced the partnership on Sunday night.

On Monday morning, Rovell tweeted about the announcement.

He called it “the day name, image and likeness became the free market” because the boosters are finding a way to pay the athletes under the “guise” of NIL. That is ludicrous.

July 1, 2021: The day college players could get money for name, image and likeness.

A group of Miami boosters, led by @JohnHRuiz, have secured $10M to pay players under the guise of NIL. pic.twitter.com/0KPKLknOMJ

Shockingly (said nobody), Rovell’s take is absolutely terrible and makes it very clear he has no finger on the pulse of the very business on which he gets paid to report. What the boosters Miami are doing is nothing revolutionary, nor is it really that big of a deal.

On July 1, 2021, the NCAA passed interim rules that allowed players to profit from their NIL. Since then, countless deals have been signed in all sports across the country.

However, the biggest market — something that literally everybody knows — is in football. Football is the cash cow for the vast majority of colleges and universities across the country.

College football players typically have the biggest spotlight, the biggest following and the most interest. As a result, they are able to make more money from their NIL than other athletes who compete in other sports.

Well, as a result of NIL, the landscape of college football has changed, kind of.

College athletes have been paid under the table for years. Take the Pony Express, Tennessee football’s alleged McDonald’s bags of cash, and what is going on in college basketball, for example.

The biggest below-ground deals took place in college football, particularly within the world of recruiting. In years prior, boosters known as “Bagmen” would illegally pay a recruit money in turn for his commitment to a certain program.

In some cases, like with Leo Lewis, Ole Miss, and Mississippi State, recruits were paid in turn for their commitments, but would take the money and commit elsewhere. Nothing could be done, because if a bagman was to snitch about how “Lewis took X amount of money from me but took more money from another school and committed there,” the bagman would be admitting that he/she committed NCAA violations.

College football players have been paid for years. Everybody knows that. It has always been the free market.

However, now that NIL is legal, the payments are not done behind closed doors. It is legal. Not directly, but essentially.

Under the new NIL legislation, a school can float the idea of X amount of money being available in NIL to a recruit if he chooses to enroll at the school. The school cannot pay him directly, but upon enrollment, deals between athletes and sponsors can be signed and paid out legally.

It has been happening all year.

Since the new NIL deals were adopted, there have been multiple instances of a program weaponizing NIL. Among those that have been reported, Texas boosters are paying each one of its offensive lineman a large amount of money per year, the Longhorns reportedly lured Quinn Ewers to Austin with some very lucrative deals, and Texas A&M boosters reportedly spent an unfathomable amount of money on their No. 1 recruiting class.

Those are just three examples in a state with a lot of money right now because oil is up. It is happening everywhere.

Just look at the expensive bidding war that became Caleb Williams’ recruitment. The former Oklahoma quarterback was offered $1 million in deals for his NIL if he was to enroll at a very obscure MAC school that never stood a chance.

And yet, despite all of this going on, and the history of college football and its Bagmen, Rovell decided that what Miami’s boosters are doing is the line. He has had enough and threw an arbitrary take out into the universe, as he normally does.

In turn, he is getting absolutely roasted.

Darrell when players who generate millions of dollars in revenue get paid 36k pic.twitter.com/Uv5wgvtSzE

I mean with this there isn’t a guise, it’s literally out in the open… they were doing as a guise previous to the NIL deals

Doing it in compliance with NCAA LAW. u may not like the game, but have to like the player. 🙌

Me looking for how this is any different than A&M paying their #1 recruiting class… pic.twitter.com/YvZeC5NypK

Two weeks back, rumors of Boutte potentially following Ricks to Alabama in the transfer portal. Last week, Boutte signs an NIL deal with a law firm in Louisiana.

And to make things worse, Rovell doubled down.

When someone pushed back on the fact that Texas has done something similar, Rovell said that he reported on it.

I said a ton about Texas.

So then what on earth is he talking about with all of this “day name, image and likeness became the free market” nonsense? Was it not the case then? Has it not been the case since July 1, 2021 when the rules changed? What about all of the under-the-table deals?