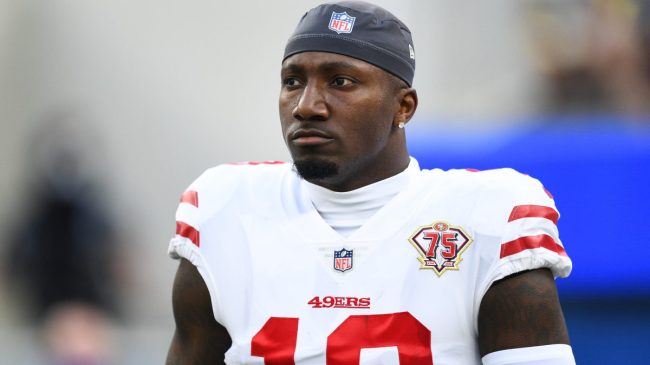 The light at the end of the tunnel could soon be coming following what’s been a rocky road for Deebo Samuel and the 49ers this offseason.

The star wide receiver requested that he be traded over the offseason, not even listening to offers from the San Francisco front office. He deleted all social media affiliation with the club and stated his dissatisfaction with the organization a number of times throughout the spring.

Unsurprisingly, the pass catcher did not show for OTAs.

The #49ers begin OTAs today and star WR Deebo Samuel won’t be in attendance, source said. Not a surprise, as his situation remains unsettled.

Incidents this offseason had many believing that his time in San Fran was done.

Still, the 49ers continued to try and keep Samuel on the roster. GM John Lynch stated that the team had no plans of making a trade. Management tried to stay the course while the waters calmed.

New report hints that Deebo Samuel will return to the 49ers

"I think Deebo Samuel & the 49ers can get a contract settled.. there is some work to be done but I think they get it done" ~@RapSheet#PMSLive #FTTB pic.twitter.com/5rQQKnn0CT

Ian Rapaport made an appearance on the Pat McAfee Show to talk some NFL. Deebo Samuel was one topic, with McAfee asking Rapoport his view on the situation as it currently stands.

“I think they can get it settled. I don’t believe it is settled right now, and there’s a lot of work that has to be done. When a player asks for a trade, basically says he does not want to be there, and has nothing to do with the contract – because remember, he basically told them ‘Don’t offer me a contract. I’m not going to take it. I want to be traded.’ – there is some work that has to get done.”

He then went on to talk about Kyle Shanahan’s role, saying that he could influence Samuel’s ultimate decision.

“Kyle Shanahan is very charismatic, and also very good at making sure football players are good at their jobs. He’s a great play designer. He has helped Deebo Samuel become the dynamic weapon he has been. So, I think they can get it worked out, but they are not there yet.”

Rapoport says it’s more of a contract issue at this point, as well as how Samuel wants to be used in the offense. He wants to be treated more like a true wideout and less like a running back so that he can extend his professional longevity. That longevity and usage could also lead to a higher salary after seeing some of the insane contracts that wide receivers have landed this offseason.

It should work itself out soon, but if you’re a 49ers fan, this is a step in the right direction.