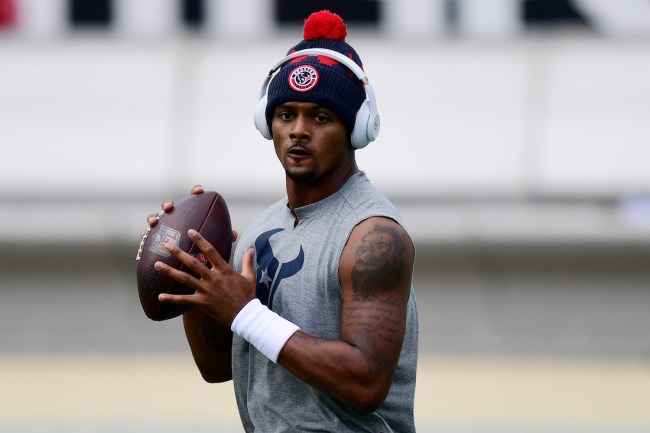 The Deshaun Watson allegations only continue to increase, with 21 women now alleging that the Houston Texans quarterback was inappropriate with them during massages he had over the past few years. While an investigation is underway from the NFL, everyone waits to see what might end up happening when all is said and done.

One interesting fact about the allegations against Watson is this: None of the 21 women who have sued the quarterback have identified themselves. While that might be to protect themselves, it is something to note. On the contrary, in the hopes of clearing his client of any wrongdoing, Watson’s lawyer, Rusty Hardin, recently released statements of support from 18 massage therapists who have previously worked with Deshaun Watson.

Released on Wednesday, here are some of the supports statements provided by those 18 massage therapists.

From Sara Fetherolf: “On July 16, 2020, I performed a very thorough massage on Deshaun, focusing on his lower back, hips and groin, at a home he was renting while visiting Los Angeles. He is one of the most professional athletes I ever worked on. When the session was over, Deshaun helped me put away my table and walked me to my car. Because it was already quite late, Deshaun texted me during my drive home to make sure I had gotten home safely. My experience was nothing like the plaintiffs are describing. I don’t believe they are being truthful.”

From Kam Phommyuong: “I first met Deshaun about three years ago. He was a regular of ours, and I worked on him twice — both times a combo Tai and deep tissue massage. He wore boxers for both sessions. I found him to very polite and respectful. I didn’t even know he was a professional football player during his first appointment. Myself and my co-workers were really shocked to hear about the lawsuits and allegations, because Deshaun never hinted at or did anything improper.”

From Jas Brooks: “I began providing massage therapy to Deshaun in 2018 and have massaged him at least 40 times since then. I worked with him once or twice a week during the season and as needed during the off season. Early on, he said he wanted me to focus on his hamstrings [he had a trainer that worked on his upper body] and just to work the lactic acid out of his legs. This included the groin, glutes and feet. He never asked me any questions and hardly ever spoke at all. In all that time, I never had a single uncomfortable or inappropriate experience with Deshaun.”

From Nadiyah Luqman: “I massaged Deshaun on August 12, 2020 at my office in Houston. He asked me to pay attention to his glutes, hamstrings and abductors. This was consistent with requests I have received from other athletes I have worked with in the past. He was always respectful and quiet, and I never felt uncomfortable.”

From Kya Hillman: “I worked with Deshaun to give him full body scrubs and body wraps. At no time did he act inappropriate with me. If he did, I would have talked with him and handled it with him.”

Considering some of the reported details of the Deshaun Watson allegations, the support from these other massage therapists are quite the contrast, and show that the Houston Texans star is doing what he can to clear his name. That might be a difficult task, whether proven innocent or guilty, but he’s obviously working hard to protect himself.

Remember, there were reports that one woman tried blackballing the quarterback a few months ago, so this whole situation is sad, confusing and raises lots of questions. Who knows what did or didn’t happen, and if the women who have sued Watson are unfortunate victims, while these 18 others never felt threatened by the star athlete. Only time will tell, but the support for Watson from the 18 women is a major step forward in helping him fight some of the disturbing allegations.