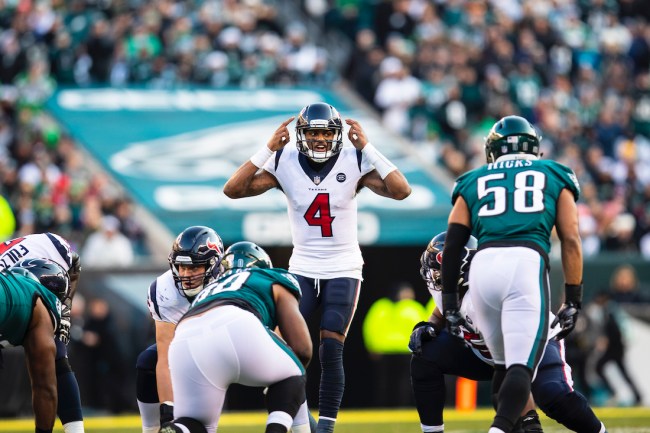 It’s been an interesting NFL offseason for Deshaun Watson to this point, with the current Houston Texans quarterback finding himself playing hardball with the organization to try and force a trade, while also dealing with sexual assault allegations that have surfaced in recent days. The league is reportedly looking into some of the latter reports, and, for now, the four-time Pro Bowler is still a member of the Texans.

Who knows how all of this will shake down over the next few months, but it’s got to be difficult for Watson to deal with it all. Imagine being 26 years old and having both your personal and professional life be in the news every single day. Uh, yeah, that’s the price of fame, unfortunately.

While there are tons of questions left to be answered regarding Deshaun Watson, none of it appears to be an issue for some NFL teams who would love to acquire him. According to a Philadelphia Inquirer report by Jeff McClane, the Philadelphia Eagles are certainly one of those organizations.

As McClaine points out, the Eagles are enamored with Watson now that they’ve moved on from former No. 2 overall pick Carson Wentz — who was traded to the Indianapolis Colts this NFL offseason. With Jalen Hurts in position to take over the starting role in Philly, the team’s GM, Howie Roseman, is reportedly looking to snag Watson… and would “give up everything” in order to make it happen.

“A trade for any caliber of quarterback is possible, but nothing would move the needle like an exchange for Watson or the Seahawks’ Russell Wilson,” McClane wrote. “It would take a significant cost. Seattle reportedly turned down three first-round picks, a third rounder, and two players for the 31-year-old Wilson. Watson is five years younger and would presumably cost more. He reportedly wants out, and has a no-trade clause, but Houston has said it has no intentions of trading the quarterback. ‘Howie will give up everything he has for Watson,’ an NFL source familiar with the Eagles’ thinking said.

“The Eagles’ roster is thin, though, and Watson, as good as he played last season, couldn’t compensate for the rest of a Texans squad that finished 4-12. The Eagles have a high first-rounder this year, and potentially two first-rounders next year if Wentz hits certain playing time conditions.”

Now, given some of the drama surrounding Deshaun Watson at the moment, while also understanding how steep of an asking price the Houston Texans would (presumably) ask for return in a trade, the Eagles’ chances of acquiring him have to be considered a long shot. However, there might be some smoke to the fire from the Philadelphia Inquirer report.

The news that Howie Roseman would “give up everything” for Watson sort of echoes Jason La Canfora of CBS Sports saying that Philly shouldn’t be overlooked as a “strong suitor” for the quarterback. Here’s what he recently said.

“Do not discount the Philadelphia Eagles as a strong suitor for Deshaun Watson,” Canfora wrote this week. “Too many sources with ties to ownership have whispered that sentiment my way for me to ignore. And the more you think about it, the more sense it makes. The more you wonder why you hadn’t explored the avenue sooner.

“The more you ponder why more isn’t being reported on this front. Because crazier things have happened in the league, by a long shot.”

The Deshaun Watson trade rumors have been going on for the past few months, so maybe the Eagles swoop in and pull of a blockbuster to acquire him. With the Houston Texans denying any interest in trading him — and these ongoing sexual assault allegations being a serious concern until more info is known — nobody knows for sure how or when this is all going to end, so buckle up and prepare yourselves for even more rumors and reports this NFL offseason.