Dwight Howard, Who Made $5.4M Last Year, Gets Roasted For Saying He Won’t ‘Play For Free Anymore’ 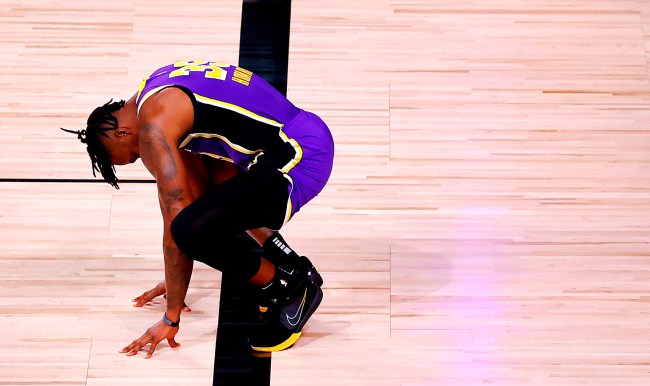 Pretty much everyone has known a person who, no matter what they try to do or say, it comes out wrong and they can’t seem to get out of their own way. Dwight Howard is one of those people.

He’s got his kid, his ex, his “wife,” and Shaq all laying in the weeds to knock him down at every opportunity.

Of course, he brings it on himself as much as anything with bad takes about things like wearing a mask, vaccinations, and now, his salary.

Howard, who made $2.4 million with the Lakers and won the first NBA championship of his career this year, is getting roasted for saying he “won’t play for free anymore.”

“I would love to come back and play for the Lakers again,” said the 34-year-old free agent. “Hopefully, this year, they give me a contract; that’s the biggest thing. I don’t want to play for free anymore. This year, it was like, ‘Okay, I’ll do whatever.’ But I think I’ve earned… a contract.”

Dwight Howard on FA: "I would love to come back and play for the Lakers again. Hopefully, this year, they give me a contract; that's the biggest thing. I don't want to play for free anymore. This year, it was like, 'OK, I'll do whatever.' But I think I've earned… a contract." pic.twitter.com/DuzNqg6EQi

To recap, Howard made $2.4 million for playing 18.9 minutes a game and averaging 7.5 points and 7.3 rebounds, all career lows, and thinks he is being underpaid.

Keep in mind, Howard also got paid $3.039 million last year by the Memphis Grizzlies and he didn’t play a second for them the entire season.

Hmmm… I wonder how that stance sitting with NBA fans. Oh, here we go!

He didn't play for free last season. He was one foot out of the league, no one wanted to touch him; that's why he was available when Boogie went down. And it was by his own hand.

Non-guaranteed lol. The guy was still paid. He didn’t play for free.

He was going to be on his couch last year watching for free. Stop it. Vet Min. Or let him go.

Play for free? There are literally billions of people throughout the world who would work for his “free” salary.🙃