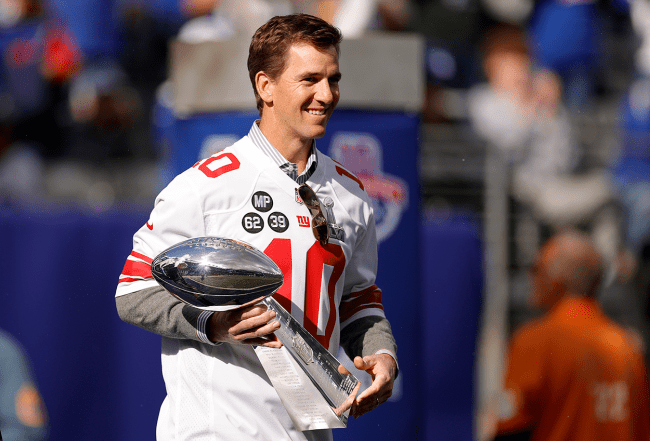 Arch Manning is the biggest name in college football recruiting since his uncle Eli went through the same process in 1999… more than two decades ago. While the scrutiny and spotlight placed on Arch is largely because of his last name and the history of quarterbacks in his family, it is also because he can sling the pill.

In fact, his uncle thinks that he could become the best and most successful athlete of the entire family— and that means a lot coming from a two-time Super Bowl winner.

During an interview with the New York Post, Eli gave his scouting report for his 6-foot-4, 215-pound 18-year-old nephew. Although ESPN dropped Arch from the No. 1 spot in its recruiting rankings (likely just for the clicks), the former New York Giants quarterback and future Hall of Famer’s assessment would disagree with that of the so-called ‘Worldwide Leader In Sports.’

Eli went so far as to say that his nephew is more athletic than both he and his brother, and said that he plays more like his dad, Archie, who was the No. 2 overall pick in the 1971 NFL Draft.

Based on the things we have seen from Arch Manning, his uncle Eli’s evaluation is true.

While at Ole Miss and with the Saints, Archie could burn a defense with his arm or his legs, although his time in New Orleans was not particularly successful because his supporting cast was so terrible. He was a lot of fun to watch as a runner and a passer, while Eli and Peyton rarely left the pocket.

Arch is a lot like his grandfather. He has shown his ability to both air it out and find tight windows, and he can make defenders miss in the open field.

In addition, Arch is insanely well-rounded. He is a near scratch golfer despite not playing often, throws down breakaway dunks on the hardwood during his high school basketball season, and recently showed off his fancy footwork prior to his senior season. His juggling, however, could use some work.

Despite what the rankings say, Texas got a generational athlete in Arch and his uncle agrees. Eli is just glad the recruitment process is over so that his nephew can go out and ball.

“Now he can just go enjoy his senior year (at Isadore Newman School,)” Eli said to the New York Post. “Go play football and try to win some football games and be a great teammate and don’t have to worry about the next step. He’s going to a great spot, great history of football in Texas, and excited to get to watch him.”

With his recruitment behind him and nothing to lose, expect Arch Manning to take things up a notch this year as he tries to lead Isidore Newman to the mountain top on his way out of Louisiana.