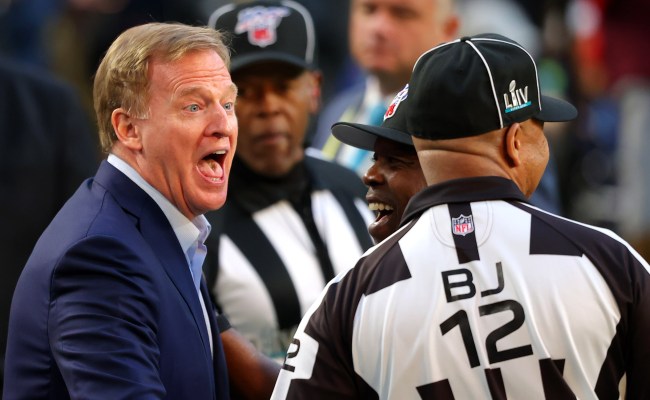 Who doesn’t love a good conspiracy theory? They are almost without fail fascinating regardless of how plausible they are. In fact, The more unhinged they are the better. Especially when it comes to sports and in particular, the NFL.

More often than not, the NFL conspiracy theories relate to something the New England Patriots did or will do. But they were bounced early on during this year’s NFL playoffs (#TitanUp) so the tin foil hat society had to focus their efforts elsewhere.

So, instead of New England, the focus this year falls on our newest NFL champions, the Kansas City Chiefs and their 24-year-old wunderkind Patrick Mahomes.

One of those fans, @MasterAtWork247 on Twitter and on your scorecards, is convinced that the NFL rigged Super Bowl LIV in favor of the Kansas City Chiefs in large part because they wanted very badly to make Patrick Mahomes the undisputed new face of the league.

This is just 1 of many calls the NFL refs gifted the Chiefs last night. BOSA WAS HELD on that deep pass by Mahomo. pic.twitter.com/0n2wjngDLs

I’ve crunched the numbers, and Stat Paddy Mahomo ranks dead last of all the Super Bowl MVP QBs. DEAD LAST. The fact that the NFL named him SB MVP and not Damien Williams proves my point of them wanting a new face of the league. I’ll be dropping a video on this next.

You don’t say? No way in fucking hell that many fans were repping the Chiefs across the country 2 years ago. Ya’ll aint fooling nobody! https://t.co/LSXU6nyYN1

Look at all those empty seats. Proof that most Chiefs fans live in other states, because most of their “fans” hopped on the Mahomo bandwagon 2 years ago. pic.twitter.com/DNqItrcE1z

I rest my case pic.twitter.com/G0BQyMvFVG

And there is like 20 more minutes of this sort of thing in the video… it’s quite a watch.