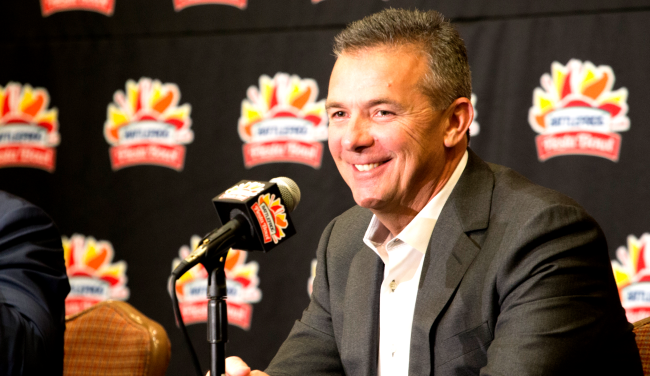 Back in October of 2017, Urban Meyer’s wife, Shelley, told The Eleven Dubcast that her husband’s three dream jobs were being head coach at Ohio State, Notre Dame and Michigan.

“He told me from the very beginning, those three jobs, I’m sorry, you have no say in,” said Shelley Meyer.

Urban Meyer, born in Toledo, Ohio, crossed the Ohio State job off his list when he coached the Buckeyes from 2012 to 2018.

In turn, that meant any chance of him coaching at Michigan was erased.

Coincidentally, with Urban Meyer struggling badly during his first season coaching in the NFL, and Brian Kelly jetting out of South Bend to take over the open coaching job at LSU, the stars may have aligned to make that happen.

Meyer’s contract with the Jaguars hasn’t officially been made public, it’s been estimated that he makes about $12 million per season. By comparison, LSU announced that it had signed Kelly to a 10 year contract worth $95 million, plus incentives.

So, with Urban Meyer faring much better in college with 187-32 as a head coach at Florida, Ohio State, Utah, and Bowling Green, the rumor mill is fully fired up. And football fans, especially those in Jacksonville, are here for it.

I want him out of Duval like 10 weeks ago. But I would stop watching college football if he left Jacksonville to go to ND.

If Notre Dame hires away that idiot Urban Meyer away from us I will become a practicing, mass attending catholic. make it happen.

Urban Meyer's entire career is built on wallpapering over his soulless and morally bankrupt pursuit of Ws on the football field without regard for who gets hurt along the way with preening self-importance and faux Christian values.

In other words he's perfect for Notre Dame. https://t.co/pETxnNcTcp

Urban Meyer is going to soon be leaving his own note for players in the Jacksonville locker room after he accepts the Notre Dame job.

With the Notre Dame job possibly opening, this might be the second thing to fall into Urban Meyer’s lap this year.

For what it’s worth, ESPN’s Paul Finebaum threw a wet blanket on many Jaguars’ fans wishes.

“You’re right, he could have had the job when Brian Kelly got it. He turned it down to go to Florida where he won 2 national championships,” Finebaum said. “I think he’s burned that bridge, and quite frankly, I think it would be an atrocious choice. He has burned out everywhere he’s ever been. He has not shown us anything at Jacksonville and I think Jack Swarbrick the athletic director is far too smart to make a mistake like hiring Urban Meyer.”

Filed to ESPN: Per a league source, Jaguars coach Urban Meyer has no interest in taking another college coaching job and remains committed to rebuilding the franchise.

Of course, Nick Saban infamously told LSU fans in 2004 that he wasn’t going anywhere. Then he immediately left the Tigers to go coach the Miami Dolphins. Then, in 2006, while with Miami, Saban came right out and straight up told the media, “I’m not going to be the Alabama coach.”