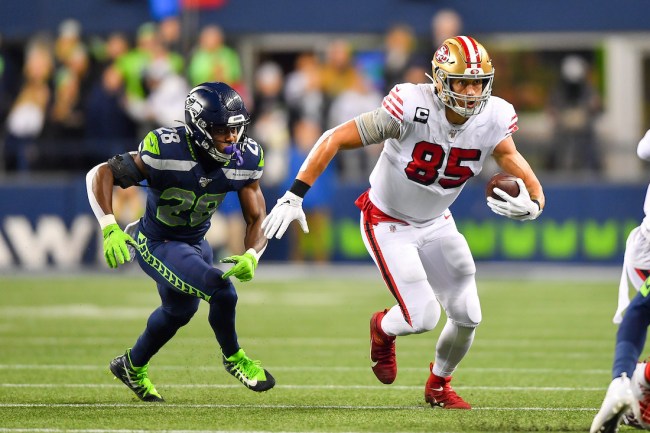 San Francisco 49ers All-Pro George Kittle is an absolute beast at his position, blending a rare combination of speed and physicality to regularly dominate defenses. But coming out of Iowa during the 2017 NFL Draft, Kittle wasn’t necessarily viewed as the game-changer he is today, with the bullish tight end slipping all the way to the fifth round before the Niners picked him.

Since entering the league that year, all Kittle has done is rack up a total of 264 receptions, 3,579 receiving yards, 14 total touchdowns and earn two Pro Bowl selections, proving himself as one of the best tight ends in the NFL. Not too shabby for a guy who saw eight other tight ends picked before him during the 2017 draft.

While the 49ers came away with an absolute superstar, according to George Kittle, San Francisco nearly missed out on him to the Seattle Seahawks. In fact, while talking to Matt Verderame on the Stacking The Box podcast, the tight end said he was on the phone with his agent being told the Seahawks would be choosing him, but was forced to hang up on his agent when a Bay Area number dialed in — which ended up being Niners head coach Kyle Shanahan and GM John Lynch.

“… It was probably a minute before the Niners called me, my agent said, ‘Hey, the Seahawks are calling. They said they’re trading up to get you,'” Kittle shared. “And then, literally, I’m on the phone with him, my agent, and — he’s on my dad’s phone — and then I got a call from the Bay Area, and I was like, ‘I’m getting a call from the Bay.’ He was like, ‘Hang up on me and answer that.’ I was like, ‘Alright, sick.’

“The next thing I know, I’m talking to John Lynch and Kyle Shanahan, saying that they’re drafting me, and they’re excited to work with me. I was like, ‘I’m excited to be there. Let’s roll.'”

Now this is why the NFL Draft is so exciting, because things like this happen behind the scenes every year without many fans even knowing until years later. Imagine how different things could’ve been had the Seahawks, not the 49ers, landed George Kittle? Would San Francisco had reached the Super Bowl a couple seasons ago? Would Seattle have added another Lombardi Trophy for Russell Wilson? Who doesn’t love these types of “what if…?” scenarios?

In the end, the San Francisco 49ers got their man and got the best of an NFC West rival in the process. Considering Kittle’s often mentioned as the best tight end in the league, seeing him standing on the opposite sideline each time Seattle plays the Niners has to hurt — especially since the Seahawks were a mere minutes from drafting the dude.