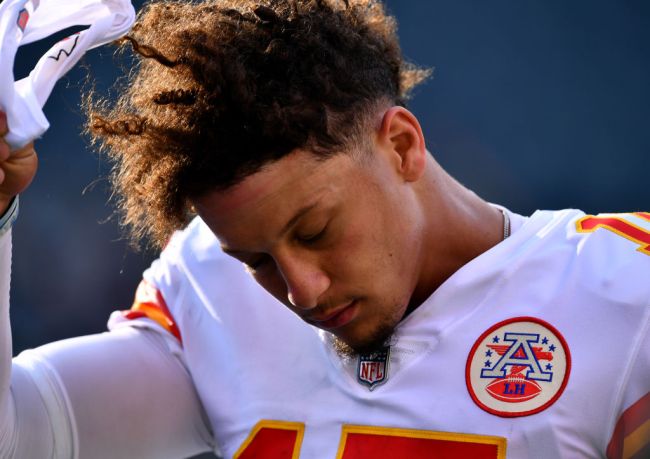 Patrick Mahomes is about as low-key as it comes off of the field. However, the same thing can not be said about his family.

Perhaps most notably, Patrick’s fianceé Brittany and brother Jackson have become famous on TikTok— for all of the wrong reasons.

Earlier this season, Jackson received quite a bit of backlash for dancing all over a Sean Taylor memorial logo on the day that Washington honored the late safety. Now, people are worried about Patrick’s well-being after one of his brother’s old TikTok videos has resurfaced.

The video, which was first posted in June, shows Brittany and Jackson randomly decide to film themselves while dining at a restaurant. As the two dance, Patrick is very clearly unamused and uninterested.

In one video, he just ignores them while Brittany twerks and Jackson does a viral trend.

♬ His & Hers – Internet Money & Gunna

In a second video, Patrick just wants to eat his meal. At the end of the dance, he holds up his hand as if to say “wtf?”

The second video has since resurfaced and people are worried that Patrick is dead inside. They are saying that he hates his life and wishes his fianceé and brother would stop being how they are.

Here are some of the concerns, reactions and jokes:

This is a broken man pic.twitter.com/Z68mPteCoH

I actually feel bad he looks so over it pic.twitter.com/AG7ydpuYSb

I feel like Mahomes is in a Get Out type of situation 😂 Poor guy pic.twitter.com/E4RIBNXpKE

Patrick Mahomes is about to give his family the Aaron Rodgers special and ✂️✂️ pic.twitter.com/X49SOeaQ5F

Will it shock you when he steps away from the game for a year off to find himself? pic.twitter.com/QKc0gwCGXV

Man they got hostage videos on TikTok now pic.twitter.com/1CVQdwjNsy

I now understand why Mahomes is having a rough season. pic.twitter.com/EdGxbHsvmn

I kinda feel like Patty is in on it and they’re just leaning into the controversy at this point pic.twitter.com/CuuC4NeApL

Not a mind reader, but we don’t think Patrick Mahomes enjoys Tik Tok…pic.twitter.com/n14TuG3a0o

“Wow Patrick Mahomes life must be so cool”

Although the circumstances surrounding the video are unclear, Patrick’s facial expression says it all. While he tries to eat his chips in peace, he just wants Brittany and Jackson to do the same.