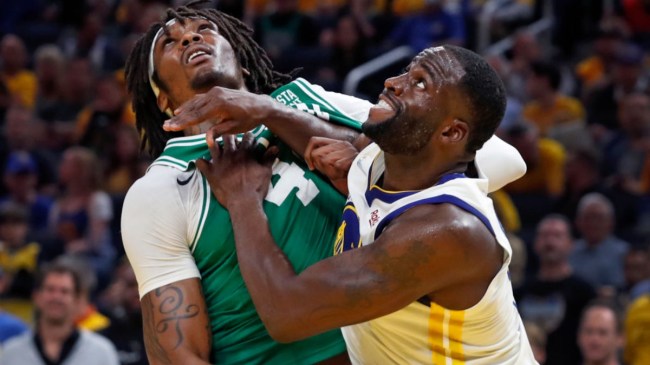 The NBA season hasn’t even started yet and Draymond Green already finds himself back in trouble.

The oft-fined forward who once found himself suspended in the NBA Finals because of repeated low blows throughout that year’s playoffs now finds himself facing discipline from his own team over his actions in practice this week.

It was reported a couple of days ago that Green had gotten into a physical altercation with Jordan Poole during a Warriors practice.

Today, TMZ released a video of the altercation.

While punching Poole has likely had a pretty negative impact on Draymond’s reports pursuit of a max contract, it seems it may have opened up another lucrative opportunity for him.

Today, after the video of his punch was released, Jake Paul tweeted out an offer to Draymond. He offered Draymond $10 million to step in the boxing ring against an opponent of his choice on Paul’s next pay-per-view.

Draymond I got $10 million for you to get in the ring on the next Most Valuable Promotions pay per view. Who you want? @Money23Green

Draymond fighting somewhere other than the Warriors’ practice facility would be an event that is sure to draw plenty of interest from sports fans. Unfortunately, it’s not something we’re likely to ever see.

Meanwhile, Paul does have a pay-per-view coming up this month. He’ll be taking on Anderson Silva in the biggest match of his career. That fight will take place October 29th in Glendale, Arizona.

With how difficult Anderson Silva was to hit throughout most of his UFC career, we probably won’t see Paul land any shots quite like what we saw from Draymond at practice.