Odd Conspiracy Theory Thinks J.J. Watt’s Cameo In ‘New Girl’ Is A Sign From The Universe That He’s Joining Browns 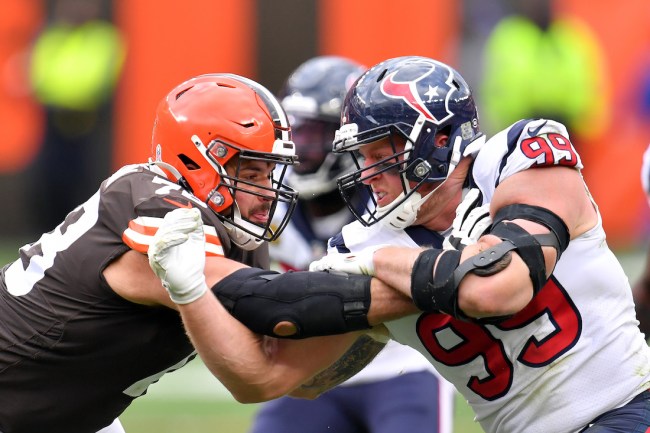 It’s official: J.J. Watt’s free agency is making people go crazy. While the three-time Defensive Player of the Year is a future Hall of Famer who will, presumably, help any team he signs with this NFL offseason, the fact that fans are going to such great lengths to try and convince themselves they know what his decision is is mind-boggling.

Just the other day, we saw Packers fans go nuts by tracking Watt’s flight info, believing their team has the inside track on the defensive end. We’ve also seen Steelers fans freak out after seeing J.J.’s brother, T.J. Watt, shoveling snow off J.J.’s walkway, convinced that it was a free agent pitch. Like I said, this thing is making people go nuts.

While those are just a couple examples of how fans are tracking J.J. Watt’s free agency, here’s one that’s on a whole new level: Browns fans think that J.J.’s cameo in an episode of New Girl from 2015 is the universe’s way of saying it’s destiny that he’ll join their favorite team. No, for real, that’s legitimately happening right now.

Naturally, some Browns fan on Twitter with the handle DynastyCLE tweeted out details of the New Girl scene, which took place during season 4, and shows J.J. Watt reaching for a Cleveland helmet for some reason. Take a look below.

4:30 seconds left in the episode, JJ reaches for something.

Can you guess what that something is!?

While the Browns fan may sound crazy at first, when checking IMDb, surprise, the entire scene is right there, with J.J. Watt reaching for the Cleveland helmet.

In Season 4’s “The Right Thing,” Watt appears at a funeral for a friend and he and Jess (played by Zooey Deschanel) are looking in a garage of the deceased friend for a cell phone. It’s in that garage that Watt appears to reach for a box with a Cleveland Browns helmet in it.

This is what J.J. Watt’s free agency has come to, guys. People searching for any and all clues to convince themselves that the bullish defensive end is going to join their favorite team. And while there have been reports that Watt might be interested in signing with the Browns this NFL offseason, can we really put much faith into a 2015 episode of New Girl as evidence that the universe is telling us something? As a Cleveland fan, I obviously hope so.

If manifesting something was that easily done, then where’s my winning Powerball ticket after I dreamt of taking home the entire jackpot a couple months ago? Unless it happens this weekend, I’m just going to stop believing in the universe giving signs of things and let J.J. Watt’s free agency play out as it’s supposed to.