Anonymous Exec Sees Flashes Of Patrick Mahomes And Aaron Rodgers In Jordan Love, So What Are Packers Waiting For? 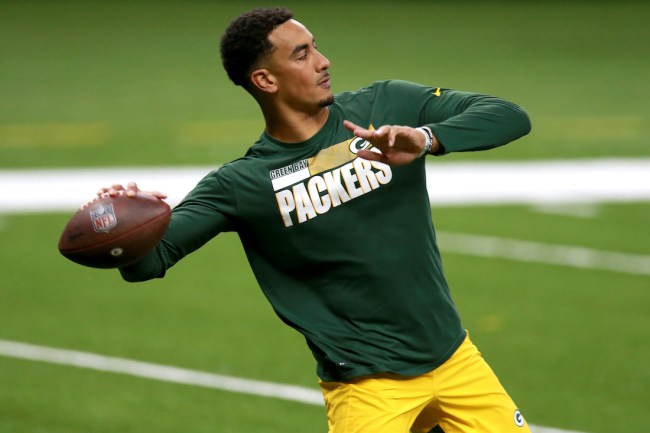 When Jordan Love was drafted in the first round of the 2020 NFL Draft by the Green Bay Packers, naturally, it caught the attention of every football fan. Not only was the organization rolling the dice on a guy from Utah State who didn’t play top notch competition in college, but, more importantly, the team opted for selecting the presumed heir apparent to Aaron Rodgers, who proved he had plenty of football left by being named NFL MVP during the 2020 season.

As we all know, Love’s selection has caused quite the stir in the year since. The choice initially irked Rodgers, who joked about taking shots of tequila after the pick, while also opening up about not being thrilled with the Packers using a high pick on his backup.

Since then, the topic of Love on Green Bay has only made things even more dysfunctional between the team and Rodgers, with the iconic quarterback reportedly trying to get the GM who selected the signal-caller in the 2020 draft fired, while also apparently threatening to retire after feeling disrespected. Yeah, it’s bad.

But here’s the thing: Does anybody really know if Jordan Love can play or not? He didn’t throw a single pass during the 2020 NFL season, and, given the scrutiny surrounding the Packers choosing him, who knows how he’s handling this all mentally.

According to one anonymous NFL executive, though, anybody wondering about how Love’s skills measure up should stop worrying, because, per this person, the quarterback compares to both Rodgers and Patrick Mahomes. Just look at what the exec said to a journalist writing a recent feature about the Packers’ backup.

Those who know Jordan Love best…

"I liked him better than Tua and Herbert."

"He can throw the ball better than most people on the planet.”

“The things Patrick Mahomes is doing, he can do as well."

Sheesh, that’s some serious praise for a 22-year-old who has yet to see any regular season game action… so no pressure, kid. With the anonymous exec also saying he/she had Jordan Love ranked higher than both Tua Tagovailoa and Justin Herbert leading up to the 2020 draft, it begs the question: What are the Packers waiting for?

There’s so much drama surrounding the organization and Aaron Rodgers right now, with many believing that the superstar quarterback is all but done in Green Bay. Rodgers isn’t just 37 years old, but he’s got a massive contract that prohibits the Packers from adding other pieces to the roster to improve upon. If Love really is as good as advertised — albeit, by one anonymous executive — why wouldn’t Green Bay rid itself of the Rodgers situation and move on to the next chapter?

The answer’s easy on paper, since there’s politics playing a role here, as nobody wants to be the person trading away a future Hall of Famer who’s coming off an MVP season and very well could win a Super Bowl this upcoming season. Then again, Rodgers doesn’t at all sound interested in ever playing for the Green Bay Packers again, so why not cut bait and let Jordan Love try to prove himself right now?

Nobody knows how this Rodgers-Packers drama will play out over the next few months. Nobody knows if Jordan Love really is a combination of the new age quarterback who’s both mobile and capable of beating teams with his arm. But after the Packers invested a first round pick on him last year and Aaron Rodgers is trying to force his way out, why not roll the dice and see if Love’s the next iconic quarterback in Green Bay’s history?