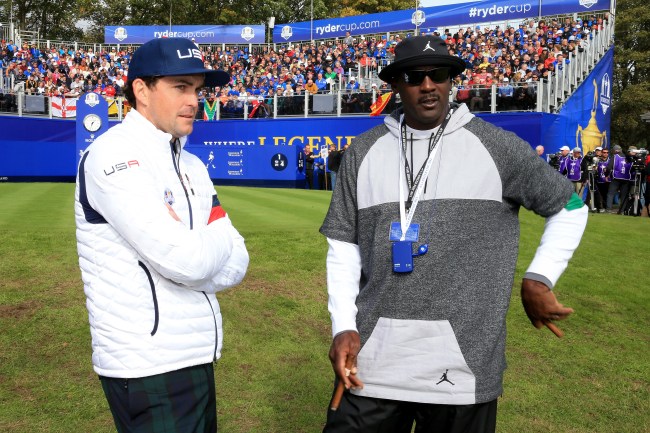 Keegan Bradley has developed quite the friendship with Michael Jordan over the years, with the 34-year-old golfer being one of the sponsors for MJ’s Jordan Brand — which is a pretty sick endorsement deal to snag — while also getting the opportunity to hang with the six-time NBA champ lots over the years. So to suggest that Bradley knows a thing or two about Jordan’s ruthless competitiveness is an understatement.

In fact, fans saw just how much Bradley and His Airness bust one another’s balls a couple of years ago, when Jordan overtook the Charlotte Hornets’ Twitter account to give Keegan shit, reminding the golfer that he’s the one wearing Jordan’s shoes out there on the course, not the other way around.

.@Keegan_Bradley Last time I looked, you were wearing MY shoes. You don't see me wearing Air Keegans…

“@hornets: .@Keegan_Bradley Last time I looked, you were wearing MY shoes. You don't see me wearing Air Keegans…”

I mean, everyone knows that Michael Jordan shows no mercy, so this type of shit-talking is probably expected from Keegan Bradley. Bottom line: If MJ feels disrespected by someone, he’s going to go to great lengths in order to embarrass that person. It’s cold-hearted — and a little petty — but there’s no arguing with the results. We all saw that during stories from The Last Dance documentary earlier this year.

With Keegan Bradley fully knowing this about his buddy, the golfer offered up some tips when playing a round with Jordan, and, unsurprisingly, it involved limiting trash-talk as much as possible.

During a recent interview with GOLF.com, Bradley said that, once you rile up Jordan, he’s going to exploit your weakness. He’s going to get in your head. He’s going to make you choke while he keeps pressing and competing. Essentially, he makes you self-destruct.

“The thing with MJ is if you can get him down, you’ve got to beat him.”

“If you start talking and he gets excited, he’ll start pressing you,” Bradley said. “He likes to press you to get you uncomfortable, so you’ve got to get him down.”

Bradley’s strategy for keeping Jordan out of his pocket? Keeping his own mouth shut.

“Whenever I get him down, I don’t say much,” he said. “I just go about my business. I can’t pick a favorite story because there’s too many of them. It’s like how you can’t pick your favorite kid.”

Considering the fact Michael Jordan finds any reason to add a chip to his shoulder — just ask George Karl — and that he thrives off being pushed, it makes sense that Keegan Bradley just avoids running his mouth on the golf course. I mean, MJ is going to talk crap whether he’s winning or losing, so poking the bear is never a smart idea. There are so many stories about opponents who did that, and, well, we all know how that ended up for them.