Kobe Bryant’s Back To His Usual Self, Proclaiming The Lakers Would’ve Won 10-Straight NBA Titles In Early-2000s If Not For One Team 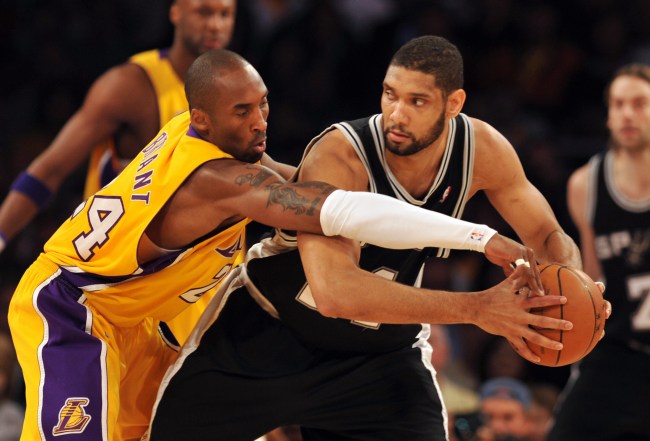 Kobe Bryant loves talking shit, as evidenced by some of the legendary trash-talking stories from his NBA playing days that we’ve all heard or read about. Hell, Bryant is so ruthless that he even went mano a mano with his own Lakers teammate Shaquille O’Neal, with the feud even expanding to after both retired — which has since sort of fizzled out a bit, becoming more of a lovefest between the two.

Even though Kobe Bryant hasn’t played an NBA minute in 3.5 seasons, one of the greatest players to ever do it is still running his mouth, hoping to remind everyone just how dominant he, Shaq and the Lakers could’ve been. Whether it was internal fighting, some other drama or egos getting in the way, or another, more disciplined team getting in their way, it’s hard to believe that a roster made up of two all-time greats like Bryant and O’Neal “only” won three titles in the early-2000s

While winning one title is difficult enough, the Lakers’ three from 2000-02 seems like they underachieved when looking at that roster. But Kobe Bryant doesn’t think it was all on his team, because, as a guest on the All The Smoke podcast with Matt Barnes and Stephen Jackson, the NBA great actually gave praise to the San Antonio Spurs, admitting that they held back the Lakers from (potentially) going on a historic, 10-year run.

“We just got beat. You know what I’m saying?

“The bigger question should be, ‘How many would we have won if the Spurs weren’t the Spurs?’ We would have ran the table for a decade.

“The talent, the coaching, everything in San Antonio was kind of a perfect storm. If they weren’t in the picture we probably would have run 10 in a row.”

Man, this is classic Kobe Bryant — and you’ve got to love it. The guy hasn’t played since 2016, and yet, here he is talking about how Tim Duncan and the San Antonio Spurs held his Lakers back from winning a wild 10 NBA titles in a row decades ago. Want to know what separates all-time great competitors like Bryant from other athletes? It’s this type of mentality, because, even at age 41, Kobe probably still thinks he could go out and contribute on a championship-contending team.