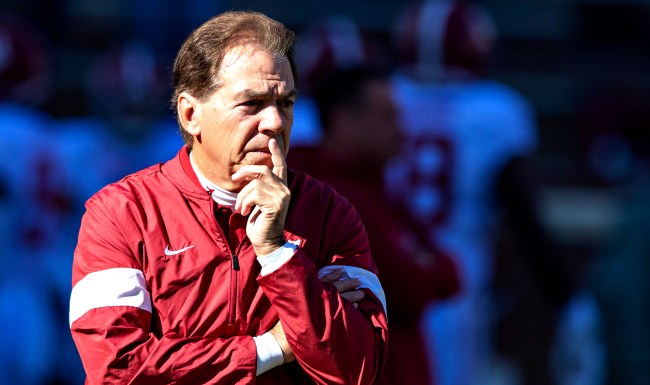 Lane Kiffin, now the head coach at Ole Miss (the same school he trolled over the scandal surrounding their coach Hugh Freeze), has a well chronicled distaste for his former boss at the University of Alabama, Nick Saban.

Ever since being kicked to the curb by Saban before the 2017 National Championship game for saying some negative things about the program prior to his taking head coaching job at Florida Atlantic University, Kiffin has had a lot of fun on social media and in other media venues at the Crimson Tide coach’s expense.

“I used to laugh when I’d walk down the Alabama hallway and see all the national championship pictures. Look at the faces on the coaches. It looks like they’re at a funeral,” Kiffin told The Dan LeBatard Show back in 2018.

He also called Saban out for being a hypocrite prior to the 2018 National Championship game.

coach Nick Saban: “I don’t yell at my assistants very much at all…” Are these real quotes? I don't get upset at my coaches much??🤥 We tell our players to control their emotions during the game bc when emotions go up decision making goes down but…. RTR https://t.co/EurFYX2hzw

So when a fan with obviously too much free time on his hands created a series of photos on Tuesday which turned all of the football coaches in the SEC into women, Kiffin was right there with a funny response to seeing his old boss in the thread.

As a couple of my co-workers said when they saw the photo, “Looks like she makes a hell of a PB&J and cuts the crust off like a Lady™ every damn time …always going on and on about the work she does for the PTO.”

Check out the rest of the coaches below. Big Ed Orgeron and Mike Leach are especially priceless.

He also did Paul Finebaum and threw in a few other coaches because why not?

There are a BUNCH more, but I am going to have to stop there because that Harbaugh one is going to give me nightmares. *shudder*