It’s Hard Not Laughing At This Rumor About LeBron James Having Interest In Knicks, But His Wife Preferring The L.A. Life Instead 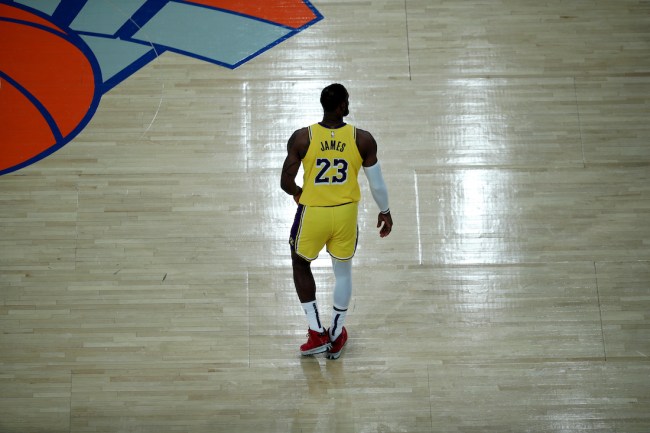 Even before LeBron James ever played in the NBA, there was always a narrative surrounding his potential of playing for the New York Knicks. Like other all-time greats, James sees the Big Apple as the mecca of basketball, and has long talked about his love for paying in Madison Square Garden. Hell, he even lived that NYC lifestyle once by taking the subway to a game back in 2017 with his then Cavs teammates. As the most polarizing athlete on the planet, that was bold.

While talk of James playing for the Knicks one day has stretched on for nearly two decades now, the four-time league MVP has never donned the Blue and Orange of the Knickerbockers. Sure, there have been rumors of it maybe happening during an NBA Free Agency period, but nothing ever really came to fruition.

That doesn’t necessarily mean that LeBron has never been interested in playing for the Knicks. Whether it was during his 2020 free agency decision when the Knicks pitched him, or in 2018 when New York appeared to have a real opportunity to snag James during the latter part of his career, he seems to tease the idea every so often.

But could he actually have been interested in putting his name on a contract and playing for the Knicks a couple years ago? According to a new rumor, it allegedly almost happened — except LeBron’s wife, Savannah James, preferred raising their family in Los Angeles over New York City. Seriously.

“We heard that LeBron wanted to come to New York. And I have really good sources about this, that he was thinking about coming to New York but that his wife wanted to be in Los Angeles, wanted the kids to go to school in Los Angeles, and that just kiboshed the whole thing.”

With plenty of connections in the entertainment and media industry, Robinson’s claim should be taken seriously. Plus, LeBron James’ love for New York is well-known, so this could very well be true.

Unfortunately, if you’re a Knicks fan, this obviously didn’t come to fruition. But imagine James on a team that just reached the NBA Playoffs and has a serious chance of making a decent run this postseason. The four-time champ would clearly be the difference maker between contending and possibly winning the whole thing — so this recent rumor has to sting a little bit.

In the end, James’ lady, Savannah, had the final word. And you know what they say: “Happy wife, happy life,” so LeBron may have hurt the hearts of Knicks fans, but his family appears to be thriving out in Los Angeles — so it looks like he made the right call… for now.

That doesn’t mean it still couldn’t happen at some point down the road, though, as rumors about LeBron James playing for the Knicks will always exist as long as he’s still playing in the league.