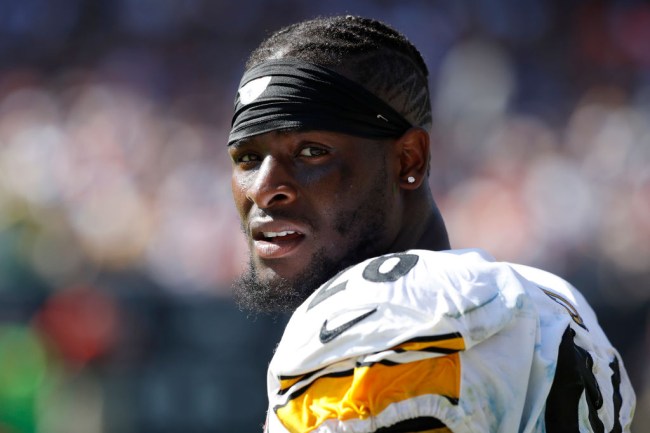 Le’Veon Bell was supposed to make almost $15 million last season but he dealt both the Steelers and fantasy football owners a major blow by deciding to sit out the entire year after the team refused to meet his demands for a new contract.

Bell had plenty of free time on his hands as the result of his holdout and put his hiatus to very good use by repeatedly rustling jimmies with some passive aggressive tweets and angling for more money while balling out in Miami.

Bell might be best known for his talents on the football field, but if he had it his way, that’s not the only thing he’d be recognized for.

In 2017, he hopped aboard the SoundCloud rap bandwagon by releasing an album under the name “Juice,” and during his visit to South Beach, he fired some shots at the Steelers by debuting the appropriately titled EP My Side of Things.

After dropping yet another album in March, Bell decided to release some new music a couple of weeks ago and everyone—including Keenan Allen—had a field day after he asked for some feedback.

are youu ready? 🔥 or 🗑 pic.twitter.com/NrvAwiXpB2

To say that effort wasn’t exactly well-received would be an understatement but it appears Bell didn’t let the haters get to him, as he was recently captured showcasing his freestyle, um, “skills.”

The verdict? Not great, Bob!

“My team yes they call me f*cking captain, I been smoking herb, I think I need a napkin.” Freestyle? Stop playin, you know @AB84 wrote this illiterate nonsensical trash. He’d later go on to rhyme “Jet” with wait for it……”Jet”. You’re right though this is fire, a dumpster fire pic.twitter.com/Uf6UiewsK3

Some one go get keenan pic.twitter.com/L1BYpO54kb

I’m normally against telling athletes to stick to sports but I think it might be warranted in this situation.