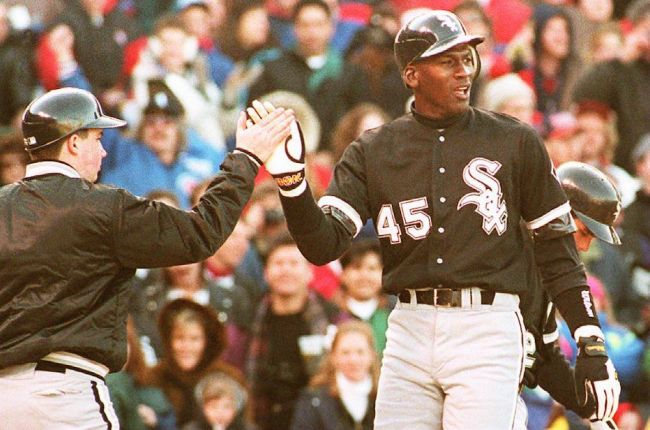 During Michael Jordan’s baseball career during the early-90s, I remember being a confused 9-year-old, wondering why the hell the best basketball player of all-time up and retired from the Chicago Bulls after winning three-straight titles. Remember, this was when MJ was just 30 years old and on top of the world, and had all but proven he was the GOAT even before coming back to the NBA 19 months later and winning another three championships.

While Jordan’s stint on the baseball field was brief, it gave him a chance to cut loose and get out of the spotlight a little bit. Sure, every single person watched every single one of his moves — and analyzed his baseball skills — but it was nothing like the attention he got during the heyday of his NBA career. Being a global icon is great, but, sheesh, His Airness couldn’t even go grocery shopping without hundreds to thousands of people just trying to snap a picture of him. It honestly had to be madness for the guy.

But Michael Jordan has said that playing minor league baseball allowed him to find himself. It gave him a chance to be “one of the guys” and play for the love of the game. After all, he went from flying first-class to riding a damn bus for hours between games. Talk about an adjustment.

Jordan, who helped fund a new bus for the Birmingham Barons while he was playing for them in the minors, actually got the chance to drive the thing, too — it just wasn’t exactly legal when he did.

The team’s broadcaster, Curt Bloom, recalled a time when MJ got behind the wheel of the bus when it was going 70 miles per hour down an open highway, which, no doubt, broke a few traffic rules. But, hey, nobody was going to tell Michael Jordan back then that he couldn’t do something, right? Here’s what Bloom once told Chuck Garfien of the White Sox Podcast about the incident.

“For a couple of miles on an open highway, completely open highway, he actually jumped in the driver’s seat and was driving,” Bloom said. “We made a switch probably going 70 miles an hour, and our bus driver got up and Michael sat in there and went straight. I certainly hope this doesn’t get anybody in trouble. The Department of Transportation, we’re sorry, and the statute of limitations has passed.

“It made a funny story. Michael Jordan driving a bleeping bus? If you’re driving somewhere in the Southeast, let’s say we were going to Carolina, you look up from your car and go, ‘I know, honey, I must be doing something illegal because I just saw Michael Jordan drive a bus.’

“It was for a laugh, and he got a good laugh out of it. It wasn’t for a very long stretch, but it was just one of those things where everyone’s egging him on. I go, ‘You can do it, you can do it.’ It just added to that year.”

OK, so that’s probably the best story I’ve ever heard about Michael Jordan’s baseball days. Imagine being on that bus and seeing the dude swap out the actual driver so he could take a joyride with his entire team sitting helplessly behind him. Amazing.

Jordan really seemed to enjoy his days in the minors, and this story only proves how different life was for him during that year away from the NBA. The dude went from being the most wanted athlete on the planet to having a little fun on an open highway just for a good laugh. It’s hard not loving that.