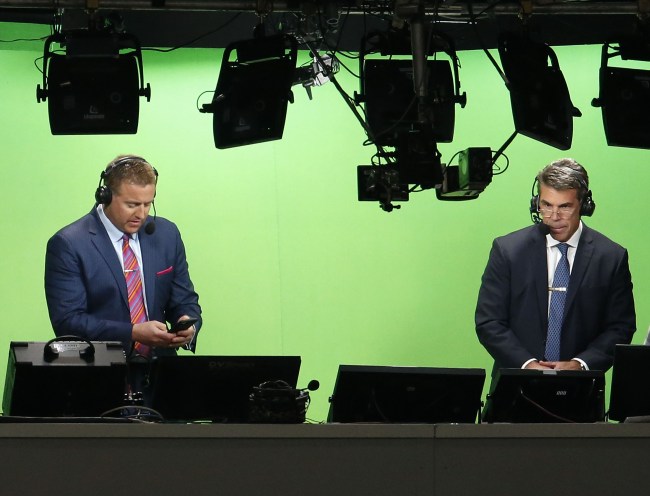 Being a broadcaster on Monday Night Football is one of the most iconic sports media jobs on the planet. From Howard Cosell to Al Michaels, to Joe Theismann to Frank Gifford — and everyone in-between — there have been some legendary names part of the NFL’s weekly primetime slot. Unfortunately, the past few years haven’t really delivered much production value, as ESPN has swapped the broadcast team to try and find the right mix in each of the past few seasons.

In 2018, NFL fans were forced to hear the blabbering insights of Jason Witten and deal with a Booger McFarland sideline cam. In 2019, we all had to deal with McFarland and Joe Tessitore in the booth — which, somehow, was an upgrade over the previous season with Witten in the booth. It sucks for Tessitore, too, because he’s actually a great choice for play-by-play, he’s just been teamed with rookie broadcasters who are making him look bad.

Can’t ESPN just find the right people to call Monday Night Football games? Has the prestige worn off? Why doesn’t anybody actually want the gig anymore, with guys like Tony Romo (who opted to stay at CBS) and Peyton Manning recently turning down the job; even after reportedly being offered millions?

That’s an answer many people are wondering, but there is a glimmer of hope that things could get better before ESPN does something drastic to make it worse.

Per Andrew Marchand of the New York Post, ESPN is seriously considering a pairing of Kirk Herbstreit and Chris Fowler in the MNF booth — and we should all be in full support of this decision. Here’s what Marchand’s report had to say.

While ESPN has Drew Brees in its sights after he retires, Steve Levy, Louis Riddick and Dan Orlovsky have emerged as top candidates for next season’s “Monday Night Football” booth, The Post has learned.

ESPN has not settled on the team of Levy, Riddick and/or Orlovsky. The network might be wise to keep it simple and go with a two-man booth. It should be clear: They do not have the job yet, as there are other options. One other name to consider is Levy’s college partner, Brian Griese.

ESPN has put the idea of moving its college team of Chris Fowler and Kirk Herbstreit back on the table, but is wary of creating a problem with its national championship duo. They can’t be ruled out, though, just yet.

As longtime ESPN employees who are best-known for their work together on both College GameDay and in the booth for college football’s primetime games, both Herbstreit and Fowler already have a 25-plus year chemistry that would bring new life to Monday Night Football. The two would absolutely represent a fresh take on the NFL after years of working in college football, and provide ESPN a chance to (hopefully) attract a younger audience to stay up late and watch full Monday night games.

Of course, there have been recent rumors that the network is chasing Drew Brees for the MNF broadcast booth once his new deal with the Saints ends in a couple of years, so moving the duo of Herbstreit and Fowler from college to pro football for a couple of years doesn’t make a whole lot of sense. You either commit to these guys long-term and add a seasoned sideline reporter — like the current option of Lisa Salters — or you run it back with Joe Tessitore, Booger and install a third guy like either Louis Riddick or Dan Orlovsky.

But if ESPN really wants to bring back the allure surrounding Monday Night Football and make it the premier TV event each week during the NFL season, getting Kirk Herbstreit and Chris Fowler is the way to go. For everyone’s sake, please just make this happen.