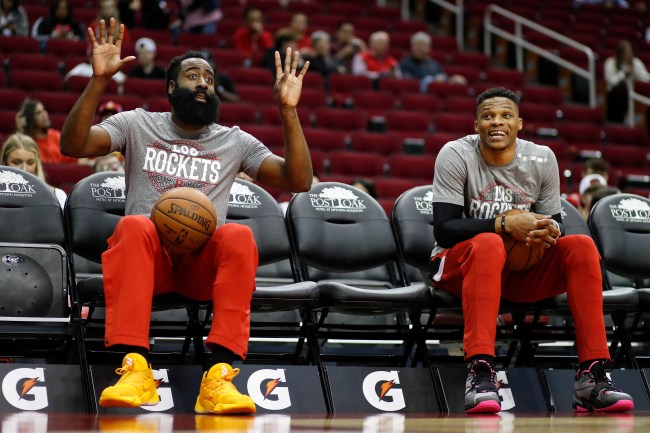 As more players enter the NBA bubble down in Orlando, sports fans will continue to hear all the strange things that are going on down there. From guys like Joel Embiid showing up in a full hazmat suit, to guys sneaking out to grab food like Richaun Holmes, to dudes getting snitched on for breaking quarantine, there’s all sorts of debauchery that’s sure to come from multimillionaire athletes spending as many as three months isolated together. It’s like a grown-ups summer camp.

While we’ve gotten a few behind-the-scenes videos about the bad food and the players’ lounge inside the NBA bubble, we have yet to really talk about the elephant in the room: The quality and accessibility of the weed.

After the league announced that players wouldn’t be tested for recreational drugs, everyone and their mother essentially assumed that players would be smoking weed left and right. After all, it’s a great way to chill out, escape life’s troubles and pass some time — especially when considering these guys will be spending lots of time either alone or away from friends and family.

But how rampant is smoking pot really going to be inside the bubble? Well… according to one agent, per Bleacher Report, it sounds as if it’ll be an activity a lot of players will do, but nobody will actually talk about.

“You’re asking about Fight Club,” an agent told Marcus Thompson II of The Athletic. “There’s no testing for a reason.”

When it comes to how much weed might be inside the NBA bubble, former player Al Harrington has a simple suggestion for guys heading to Orlando — bring more than you think you need. That’s what Harrington told The Athletic.

“Bring more than you think you’re going to need,” Harrington told Marcus Thompson II of The Athletic. “You might have that teammate who’s never smoked and might want to try it since they’re stuck in a bubble. So you might be supplying other people.”

Harrington, who launched his own cannabis company, Viola Brands, isn’t alone in his belief that NBA players will want to stash up on the sticky icky stuff. Considering the country has been fighting the pandemic with social distancing and isolation for nearly five months now, there are other cannabis brand operators sharing a similar belief — especially because this bubble restricts athletes from physically interacting with anyone in the “outside world.”

“We’ve been technically in a bubble while sheltering in place, and it’s driving people crazy,” said Tucky, the owner of Blunts + Moore, a store that sits across the Oakland Coliseum complex. “So imagine what NBA players and WNBA players are about to go through. No kids. No wife. No husbands. That’s going to be stressful to any point.”

So, while we’re all pumped to get basketball back and see how the rest of the season unfolds, maybe not-so-secretly, players in the NBA bubble are probably just as stoked to pass the dutchie as they are to pass the basketball.