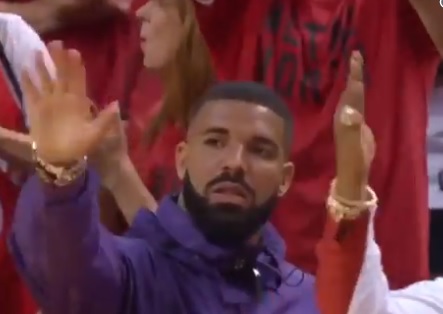 The NBA Finals are off to a hot and heavy start already, after Game 1 gave us a surprising outcome that saw the Toronto Raptors beat the Golden State Warriors. In addition to the action on the court, we saw the Raptors’ biggest fan, Drake, getting into it with two of the Warriors’ biggest stars, Stephen Curry and Draymond Green, with the latter even going off on a reporter after she asked about the “scuffle” he and the rapper got into. The drama is peak in the NBA Finals, and it just started.

While Game 1 itself was a bit of a shocker, there was something else that fans may have noticed during Game 1 of the NBA Finals: Drake was wearing a Dell Curry Raptors jersey — which is a nice little troll job, which he seemed to be all about after the game, too — but he also had a sweatband around his forearm, looking as if he was ready to check-in and ball out for his team. Take a look below at some of the pics of the superfan on the sidelines with the black sweatband on.

.@Drake was 🔥☝️ last night. How are you feeling this morning, @Raptors fans?#NBAFinals | #WeTheNorth pic.twitter.com/ARirzL7MKC

Most people wouldn’t wear that unless they planned on sweating, right? Well, Drake had a different reason for wearing the thing around his forearm in Game 1 of the NBA Finals — and, if you’re superstitious, you’ll agree with his decision to do so. It’s because Drake has not one, but two tattoos in that spot of honoring Warriors players, Kevin Durant and Stephen Curry, and he didn’t want to show any support to the visiting team as his Raptors play them for a championship. Not a bad move, right?

Considering Drake’s one of the biggest fanboys on planet earth — c’mon, we’ve all heard of the Drake Curse that has bit teams in the ass over the years — it’s probably not too surprising that the Toronto native has ink of two of the best ballers on the planet. But the fact that he covered the tats up with a sweatband is a little awkward, right? Wear a long sleeve shirt beneath the jersey or something, man, because it just looks weird rocking that black band when you’re not actually perspiring.