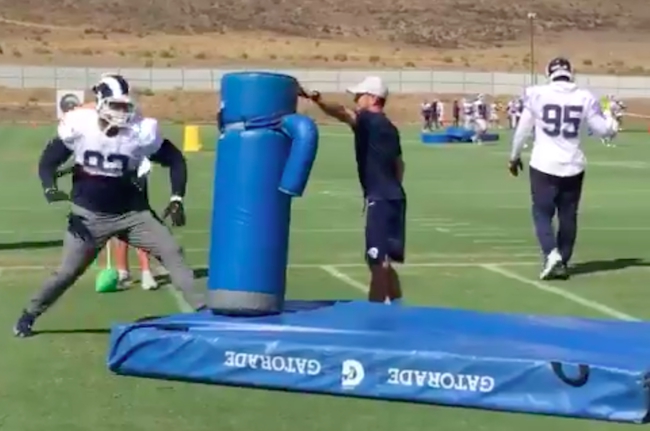 The NFL instituted a few rule changes heading into the 2018 season but none of them have been more controversial than their updated policy concerning roughing the passer.

In an attempt to protect the precious snowflakes better known as “quarterbacks,” the league has seemingly instructed referees to throw a flag whenever a defender stares a little too intently at the QB.

Am I being hyperbolic? Perhaps a little bit.

However, there have been an incredible number of awful calls over the first few weeks of the year on seemingly clean tackles that have resulted in a ton of 15-yard penalties.

Looking for some examples? You don’t have to look that far.

The Packers basically lost a game because Clay Matthews got dinged for this hit.

Arden King barely touched Baker Mayfield but was still punished for a crime he didn’t commit.

This has to be the absolute worst roughing the passer call of all time pic.twitter.com/hV0h3nXoYj

Joe Buck labeled this the worst call he’d ever seen.

Roughing the passer!! Welcome to 2018. pic.twitter.com/oIIrVplQAO

The ref’s inconsistency was also on full display during last night’s matchup between the Colts and the Patriots, where Andrew Luck got absolutely destroyed without a call and Tom Brady managed to draw a flag after a defender touched his helmet.

Brady gets tapped on the helmet: Roughing the passer!

A few people have offered up some solutions to help players avoid being flagged— like the Packers fans who put together an instructional video to help Matthews avoid falling victim to another awful call.

How to sack a quarterback in the NFL….wait nvm. pic.twitter.com/EYuOo4qNEq

Kevin Hart also did his part by introducing a couple of new strategies.

How to sack a QB with @KevinHart4real: pic.twitter.com/JdEV7jNLCS

However, I don’t think either of those top Ndamukong Suh’s new approach, which involves punching the quarterback as hard as humanly possible.

Suh showed off the strategy at practice yesterday and proved you do not want to get in the way of his fist in the process.

I guess if you’re going to get flagged you might as well get your money’s worth.