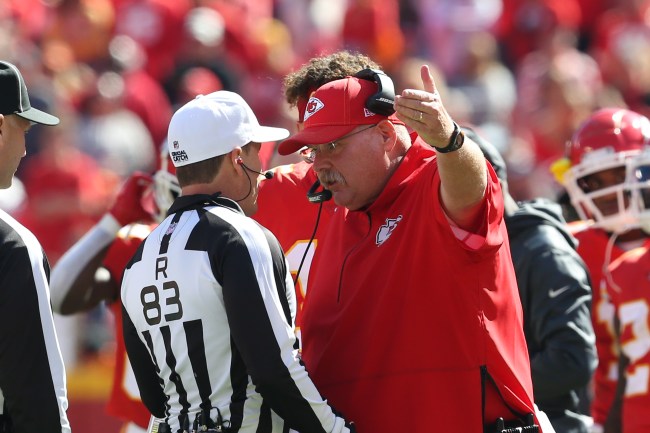 Pass interference review was never, ever going to work in the NFL. While it was a good experiment for the 2019 season, it’s reportedly time to bid farewell to it, because the league is destined to remove it from the rulebook whenever the 2020 season actually begins, per reports — and that’s a very good thing.

Competition Committee continues to discuss rules ahead of still-on-schedule meeting at end of May, when votes would take place. PI replay almost certainly will NOT be extended, according to one person familiar with conversations.

Remember: in end-of-season survey of teams, they were asked about making PI replay review permanent or extending for one more year and overwhelmingly teams were against either option.

Look, there’s no denying that pass interference review had good intentions, it just didn’t follow through on them. Like a girlfriend who says she really likes you but instead chooses to go out with friends without you, the PI review test just couldn’t make a real commitment to the league — nor its refs. Sure, the rule was installed following the horrific botched call during the 2019 NFC Championship Game between the L.A. Rams and the New Orleans Saints, so props to the NFL for saving face and trying to show fans they were going to try and eliminate that moving forward, but, alas, the idea just wasn’t going to stick with the zebras on the field each game.

Imagine being an NFL official who already has a tough burden remembering rules, making the correct calls, dealing with badgering coaches and players all game long, and then being told that, upon further review, your judgement call of pass interference was wrong. That’s not something any human being wants. It’s why refs rarely overturned pass interference even after reviewing them — even if the tape showed the contrary.

Since there was so much confusion about pass interference review and what is and isn’t PI in the first place, if reports are accurate that the league’s not bringing review back next season, the NFL’s making the right call. Just look at some of the questionable pass interference plays from the 2019 season that weren’t overturned, proving why the season-long trial period was a major flop.

Looks like a push-off to me, but was it enough?pic.twitter.com/CZdiiMqsk5

There’s no doubt Kyle Rudolph extended his arm to hold off the Saints defender on this game-winning touchdown in overtime during the playoffs. Was it enough for pass interference to be called? Who knows? But it wasn’t even reviewed, which shows how inconsistent the whole idea of the rule was to begin with.

In the moment, the refs probably didn’t want a playoff game to come down to a review — right or not — and ended up not reviewing this. But the case could be made that PI happened on this play, and the rule is in place for moments like these; but it wasn’t even utilized.

By the definition of the rule, this is pass interference at its finest. The 49ers defender never turns his head, is harassing the receiver beyond 5 yards, and then actually grabs the Seahawks player in the end zone — which would have put the ball on the two-yard line with a new set of downs.

Once again, the refs didn’t use pass interference review in the moment, but then backpedaled afterwards by saying that it was looked at, but that there wasn’t enough to force an official replay. Below is the statement, per NBC Sports.

With this missed call, the Seahawks fell to the No. 5 seed and had to play on the road in the playoffs, rather than (potentially) winning this Week 17 matchup and getting a first-round bye. So, yeah, it impacted a helluva lot.

What in the actual hell were NFL officials smoking during this one?

This happened a mere yard from the line of scrimmage, with Colts receiver T.Y. Hilton running into a Chiefs defender and setting an apparent pick. It looked harmless, and was probably just a brainfart by the ref, right? Well, as if throwing the initial penalty flag wasn’t bad enough, this was actually looked at again by refs and upheld, proving that pass interference review was a total crock of shit.

I know you probably don’t care, but because they did not reverse this obvious pass interference (in a game I don’t even care who wins) I’m turning the game off and getting caught up on my DVR recordings. I’ll watch the highlights on SportsCenter tonight (which I’m anchoring) pic.twitter.com/9VnVvwh9rv

Another blatant pass interference review that absolutely got missed by the refs, when Ravens defender Marlon Humphrey pulled and held the arm of then Texans wideout DeAndre Hopkins to prevent a touchdown, everyone watching knew it was going to be called — until it wasn’t.

It’s as clear as day that Humphrey tugged on Hopkins — which, in hindsight, was smart, because he prevented a touchdown and would rather take the penalty yards. However, refs didn’t just refuse to throw a flag on this, but they didn’t overturn it even after reviewing it, which showed the zebras had no intention of embarrassing themselves, nor a colleague, by questioning the initial judgement on the field.

Another play where pass interference was obvious, refs didn’t just miss Pats defender Jonathan Jones bear-hugging Giants wideout Golden Tate, but they actually allowed it, refusing to call PI once they looked at the review. It’s understandable to miss it on the field, but, c’mon now, if a ref saw the replay of that video and still determined it wasn’t a penalty, does that person really have the best interest in getting the call right? No.

Who knows if the early reports are true or not about the future of pass interference review in the NFL. After all, teams still need to vote on this and some may think it’s actually smart to keep it around. But, as those plays above prove, it’s not something that was ever taken seriously by the refs — nor was going to work due to that — so here’s to hoping it really is a dead rule walking and is gone forever.